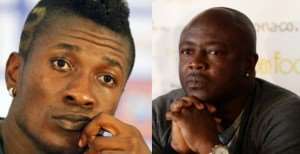 Ghana captain Asamoah Gyan has hit back at Abedi Pele over his reported criticism of  the constant Ghanaian player exodus to the Arab and Asian countries which he believes is targeted at him.

Gyan, who is Africa's highest paid player, is unhappy with the criticism of the Ghana legend, which is perceived to be targeted at him after he joined Chinese side Shanghai SIPG on a mouth-watering deal.