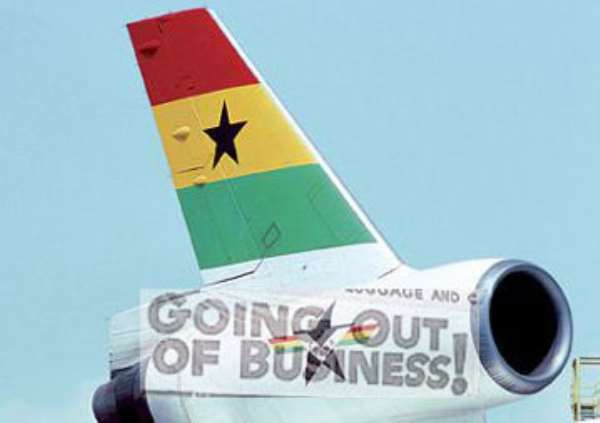 ... It is not a registered company ... negotiation lacked transparency A controversy is quietly brewing over the legal status of Ghana International Airlines (GIA), as well as the appropriateness of the memorandum understanding reached between Ghana Airways and GIA, who have been given the nod as Ghanair's new partners. Three experts and a reputed businessman have separately said there are credible indications that GIA is not a registered company either in Ghana or in the US, and for that matter they do not exist. One of the experts voluntarily alerted The Chronicle, and the other two experts and the businessman were reached for comments. Meanwhile, Chronicle checks at the Registrar-General's Department revealed that there were no records that GIA was registered in Ghana. According to some of the experts, it is not right for government to partner and or sign a memorandum of understanding with groups who are neither recognized as a legal entity or who do not exist. One of the experts said, “ At the time of signing an MOU or issuing any letter of intent to GIA, government should have asked for the legal status of this company and also do some checks on the credibility of the people behind GIA. This is modern business standard. How can a whole government have agreements with group who do not exist in the real sense of the word?”
Some of the experts also observed that even though some people behind GIA may have good CV's it is worrying that a deal of this nature is going to an entirely new company which has no credentials or noticeable track record by virtue of them being new.
When The Chronicle approached Dr. Richard Anane, Minister Roads and Transport, who has been in the forefront of negotiating with GIA for almost a year now, he could not give a concrete answer as to the legal status of GIA The Chronicle asked the minister yesterday whether GIA “is a registered company in Ghana or in the US.” The minister's answer was that: “ It is a consortium from America. Now do you that something they call special purpose vehicle? You can constitute the group made up of certain groups in order to give a certain service. So this is more like a special purpose vehicle formed by the consortium in order to be able to give a certain service which is to partner with Ghana Airways.” When The Chronicle pressurized him as to whether he knew for fact that the company has a legal status by way of registration or not the minister said, “That's an American group from America so it will come as an American group.” By press time when the paper followed up with another call to the minister, he asked The Chronicle to call back, but when that was done, the phone rang several times without an answer. Meanwhile, Alhaji Asuma Banda, a reputed Ghanaian businessman and close pal of President Kufuor, had warned government to be cautious of the new deal struck between Ghana Airways and Ghana International Airlines because the deal “lacks transparency and it too sweet to be true.” When The Chronicle inquired from him whether the reservations of some experts that it is not right for government to issue a letter of intent or sign any memorandum of understanding with GIA due to the fact that they were not a registered company, Asuma Banda said, “Ahaa! I have also received calls and my own search indicates that GIA is not a registered company. How can government sign an MOU with a company, which has no legal status? I am convinced that GIA is not a legal entity, let them prove me wrong if I am not right.” Mr. Banda noted that “we must all try and save Ghana Airways but we must not allow ourselves to be taken for a ride. We appear to have created the impression that we are desperate”. The President's friend said aside of the fact that the whole Ghana Airways negotiation lacked transparency; he had also received calls, as well as emails, from outside Ghana, saying that government must watch the deal with GIA. The Chronicle has learnt that as far back as 2002, Alhaji Asuma Banda's proposal to take over Ghana Airways was accepted by the Sam Jonah-led Board of Ghana Airways, but when the board requested permission to sign a contract with Alhaji Banda's company, there was no response from government.