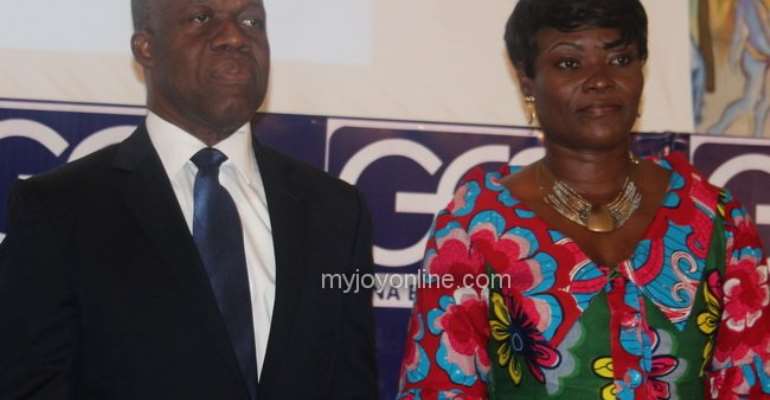 The 2015 Ghana Economic Forum has ended with a five year strategic agenda to ensure Ghanaians control a significant stake in various sectors of the economy.

The two-day forum organized by the Business and Financial Times in collaboration with JOY BUSINESS brought together business leaders and public officials to deliberate on the country’s economic challenges and the way forward.

The theme for this year’s edition was – “Ghanaian-owned economy – Setting the Agenda and Achieving It”.

The CEO of the Business and Financial Times Edith Dankwa [middle] outlined the 5-year agenda to ensure tangible results over time.

“This year we realized that looking at the challenges confronting the economy, we really needed to own the economy as Ghanaians and thus the theme. The “Ghanaian-owned economy” would be the common theme for the next five years during which we want to see Ghanaians own the economy. Based on the prevailing economic situation at any point in time, each year would see a different clause or phrase added to the common theme” she said.

Vice President, Kwesi Amissah Arthur graced the opening of the two-day event where he challenged banks to stop investing in high-interest yielding Treasury-Bills and rather focus on equities and other long-term instruments to develop the capital market in the interest of the economy.

“You need to mobilize and channel the savings of small households and savers and that should be the primary responsibility of the financial sector. The banks are too comfortable with the fixed income from money market instruments including Treasury Bills with high interest and therefore not lending to the private sector but reporting huge profits at the end of the year. We must force the banks to move form that comfort zone. They must encourage people to put their monies into equities by putting a vote of confidence in the stock exchange and so on” he said.

The 2015 Ghana Economic Forum was climaxed with focused group discussions on energy, infrastructure and debt-financing. Resolutions from the three (3) sessions were used to establish a provisional communique.

The energy session for instance established4 that, it is about time the country focused on developing other alternative sources of power by evaluating all options but also prioritizing – given that the over reliance on the Akosombo dam over the years is largely to blame for the current energy situation.

Nana Osei Bonsu, CEO of Private Enterprise Federation also emphasized that the country needs both short and long term solutions. He also wanted ECG to be given competition by opening up the power distribution system. Ghanaians he added must also be ready to pay more for the other alternatives sources of power.

The media was not left out as having journalists were said to have a huge responsibility of effectively bringing issues in the energy sector to the fore by specializing in power and petroleum reporting.

The infrastructure session also established the need for a clearing house regarding things that other sectors. Also was suggestions for Ghanaians to play a significant role if ECG is to be privatized.

In the debt and finance session, it came to light that government needed US$15 billion over the next 10 years for infrastructure development. But with government financially constrained, Private sector participation was identified as key and thus Public Private Partnerships, PPP’s. Reviving the PPP programme was also highlighted as important as well as the provision of incentives for private sector participation in the provision of the requisite infrastructure.

Public sector funded infrastructure projects were also said to be overpriced due to corruption and undue delays. Government was urged to limit borrowing to improve macro-economic environment whilst munipacal assemblies were also impressed upon, the need to float municipal bonds to address the challenges of financing infrastructure at the local government level.

The organizers were generally charged to ensure the recommendations get to President Mahama for implementation. The CEO of the Business and Financial Times Edith Dankwa explained the strategy for achieving this and also ensuring the event does not become just another talk-shop.

“We will serialize the various presentations in our newspaper for the benefit of those who didn’t attend and then we would present a communique to the Vice President who has opened his doors to us and promised to ensure the recommendations are implemented.

Six months down the line, we would in partnership with JOY BUSINESS use our platforms review what has been said and done. We would through our newspaper for instance do a special feature on this and then keep pushing the agenda” she concluded.