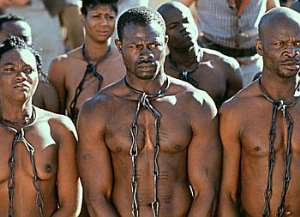 ‘Slavery’ does not lend itself to a single and easy definition. There are many definitions for the phenomenon and this is because scholars define it to suit their cultural and social background. Moreover, the kind of slavery that existed in Africa was different from that of Europe. Indigenous slavery existed in various forms before the arrival of the Europeans in Gold Coast. Indigenous slave was known as Odonko or Adihyifunafu or Akoa in Akan language. R. S. Rattray (1929) found out that in Asante, the term akoa did not mean ‘slave’ in the degrading European sense, but to anyone in a subordinate position such as the subject of a ruler. Again, Adihyifunafu was voluntary a slave who sought protection from powerful family whenever he or she was in crisis or hardship.

Indigenous slaves enjoyed certain rights and privileges before the introduction of the Trans-Atlantic Slave Trade in Gold Coast. Slaves could inherit their master, they could marry from their masters’ family, in some cases, they were treated as members of the household and could be set free from bondage. In some cultures, slaves whose master demised were to be sacrificed in order for him or her to serve that master in the underworld. Slaves were thus treated humanely and with dignity before the introduction of the TAST.

Trans-Atlantic slave Trade (TAST) and Trans-Saharan Slave Trade (TSST) existed in Gold Coast. TAST was the shipment of enslaved Africans from their homeland (Africa) across the Atlantic Ocean to the Americas. The discovery of the new world (Americas), the introduction of Sugarcane and Tobacco plantation in the Americas increased the demand for slaves in West Africa and for that matter Gold Coast. Trans-Atlantic Slave Trade lasted for almost four hundred years. Slaves were obtained through pawning and panyarring (unlawful seizure of a person to persuade a debtor to pay his creditor). Others were war captives, criminals and debtors. Slave raiders also raided smaller villages for slaves.

Slaves were acquired from the inland of Gold Coast and were then put in chains, and maltreated till they got to the coast. At the coast, these slaves were then sold to the European merchants for guns, mirrors, cloths, foreign alcoholic drinks, gold dust etc. The Europeans then housed these slaves in their castles and forts which were originally built as a warehouse for their goods and to serve as shelter for their merchants. The conditions of the slaves in the castles were very bad. Some were raped by the European slave masters, others were severely punished and some were even murdered and thrown into the sea. The surviving strong and healthy slaves were then transported in ships across the Atlantic Ocean to the Americas where they were re-sold to their new owners and were to be used as plantation and domestic labour respectively. Here, the maltreatment of slaves didn’t stop but rather intensified.

The negative effects of the trans-Atlantic slave trade on Ghana are immense. The slave trade crippled local indigenous industries and agriculture because people became afraid to go to their farms and because other famers and craftsmen joined the slave business as a result of its lucrativeness. It also took away the cream of the society: strong and able bodied men were taken away as slaves whiles the weaker ones were left behind. These strong people could have helped build a better Ghana we are seeking for today and the last negative effect of TAST was that, it changed the character of the indigenous slavery: all privileges that slaves initially enjoyed were abolished and local slave masters began to maltreat their slaves as some kind of property.