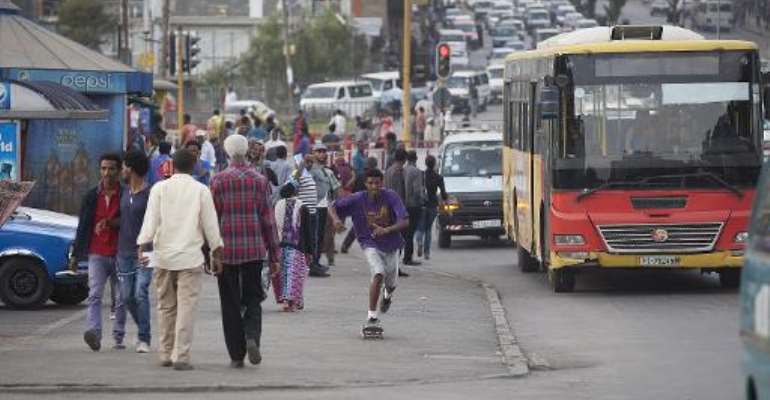 A local skateboarder, part of the Ethiopia Skate organization, seen on a street of Addis Ababa. By Zacharias Abubeker (AFP)

Yet growing numbers of fans are taking up this once unknown sport in Addis Ababa and attracting the support of skateboarders worldwide.

In the bustling market district of Shiro Meda, gangs of children rattle down the hills, flipping boards painted in the colours of Ethiopia -- green, yellow and red -- as they show off the latest tricks they've learnt.

It's a tough area, and skateboarding offers moments of fun and escape for the young people living here.

"There's nothing for the kids in the neighbourhood, nothing to inspire them," said Israel Dejene, founder of a local skateboarding group, who said he was inspired by watching children slide down the pavements with bits of plastic fixed to the bottom of their shoes for fun.

"These skate sessions are the only positive thing they can do," added Israel, who named his "Megabiskate" project after the Ethiopian word "megabi", meaning someone who "gives life to others".

The group aims to use the sport to help the children, as "a tool to engage the kids, to develop self-esteem, confidence and an alternative lifestyle to the troubles" on the streets.

"Skateboarding creates a positive community, it teaches them to teach each other tricks and promotes a good self-image," added the dreadlocked Rastafarian musician, who discovered the sport during a visit to Sweden, where he was fascinated by "this board that seemed attached to the feet in the air".

The project has won international admirers: American professional skateboarders Tony Hawk and Nyjah Huston visited in February bringing with them dozens of boards.

Their visit was excitedly reported on social media, putting the spotlight on Ethiopia's small but growing community of skateboarders and inspiring still more to join.

The highland city of hills and steep roads is a good place to learn, despite its streets being sometimes crowded with livestock or trucks feeding its building boom.

"I live on the top of the mountain, when I leave my house I'm going down for miles of hills at high speed. Addis Ababa is huge for skating," said Yared Gobeze, a young skater.

Yared joined Ethiopia Skate, a group of skateboarders who meet several times a week in the streets of the capital, doing tricks on boards mostly donated by skaters in Austria and the United States.

"As soon as people see a new sport that they cannot picture in Africa they're amazed and happy to see it there. It's amazing," Yared said.

Some 200 skaters take part, with large and cheering crowds gathering to watch them as they jump curbs, fly down stairs and often fall hard on the ground without any protection.

"We just try to use whatever there is in Addis -- even if the spots are pretty bad we just make the best out of it," said Abenezer Temesgen, one of Ethiopia's skate pioneers.

Some even block the flow of cars to skate across or down the road, as stunned motorists watch the youngsters speed past, flipping up onto curbs on battered boards.

Well-dressed young women snap photographs of the stunts with their mobile phones, while raggedy children plead for a board, and their turn to try.

"Skating is growing -- now we've got hundreds of kids skating," Abenezer said, noting that the emergence of skateboarding in Ethiopia also reflects a yearning for normality, to be like other nations and other young people.

"We've been known for being poor, but Ethiopia is bigger than that," he added. "You can't represent Ethiopia just by being poor. Coming here skating with the kids makes me love my country."