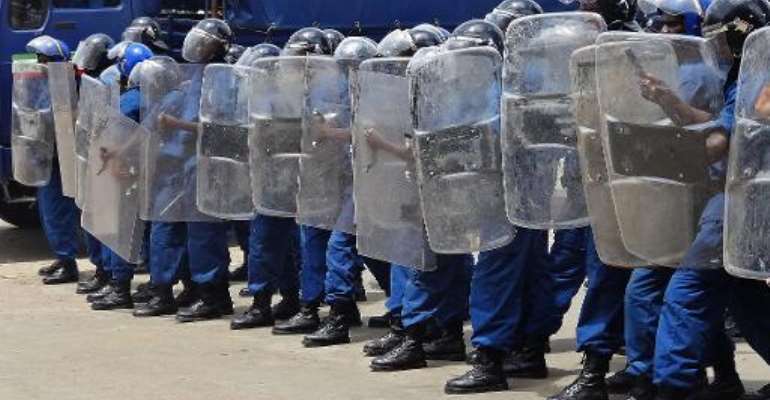 Burundi police form a blockade during a gathering of opposition activists in Bujumbura on April 17, 2015. By Esdras Ndikumana (AFP/File)

Bujumbura (Burundi) (AFP) - Two protestors were shot dead on Sunday in clashes with police in Burundi's capital, witnesses said, as protests escalated over a bid by the president to seek a third term.

Clashes erupted in several parts of Bujumbura the day after the ruling CNDD-FDD party, which has been accused of intimidating opponents, designated President Pierre Nkurunziza as its candidate for the June 26 presidential elections.

Opposition figures and rights groups say the president's effort to cling to power is unconstitutional, and there are fears the worsening crisis could plunge the African Great Lakes nation -- which only emerged from long and bloody civil war in 2006 -- back into violence.

Independent eyewitnesses said one person was shot dead in the city's Ngagara district and another in Musaga after police used live ammunition to disperse crowds who defied a government ban as well as warnings that the army could be called out.

One body was left in the streets while another was taken away by Red Cross workers, several witnesses said.

"We had called for peaceful protests and that is what happened, but the police and ruling party militia fired real bullets at the protestors," said a Burundian opposition leader, Frodebu Leonce Ngendakumana.

Local media reports added that several more people have been wounded in the city, while several police have also been hurt in stone-throwing while trying to prevent thousands of youth from marching to the city centre.

Tens of demonstrators have also been arrested, witnesses told AFP.

Burundi's Interior Minister Edouard Nduwimana condemned what he said were "uprisings called for by certain politicians and civil society".

The independent and influential African Public Radio (RPA), which has been for months reporting on government intimidation of opponents, was also threatened with closure unless it halted live broadcasts, officials said.

Tensions in Burundi have been mounting for months with Nkurunziza -- a former rebel leader, born-again Christian and football fanatic -- laying the groundwork for a third term.

Opposition groups say a third term would violate the constitution as well as the peace deal that ended the civil war.

The influential Catholic Church has also spoken out against the president's plans to stay put, and earlier this month UN rights chief Zeid Ra'ad Al Hussein warned that the country was at a "crossroad" between a fair vote and a route back to its "horrendously violent past".

On Saturday Washington condemned Nkurunziza's candidacy and warned the country "is losing an historic opportunity to strengthen its democracy."

"We specifically call on the Burundian government to respect the rights of all peaceful political parties and their candidates to campaign, hold meetings and rallies and express their views," the State Department said.

Thousands of Burundians have fled the country in recent weeks to neighbouring Rwanda and Democratic Republic of Congo, according to the UN's refugee agency, which has also warned that the numbers of refugees could swell "with more political tension rising and more acts of violence being reported."

Many are fleeing threats by the pro-government militia Imbonerakure, the youth wing of the ruling CNDD-FDD party. Rights groups allege that the militia has been armed and trained over the past year in order help Nkurunziza stay in office.