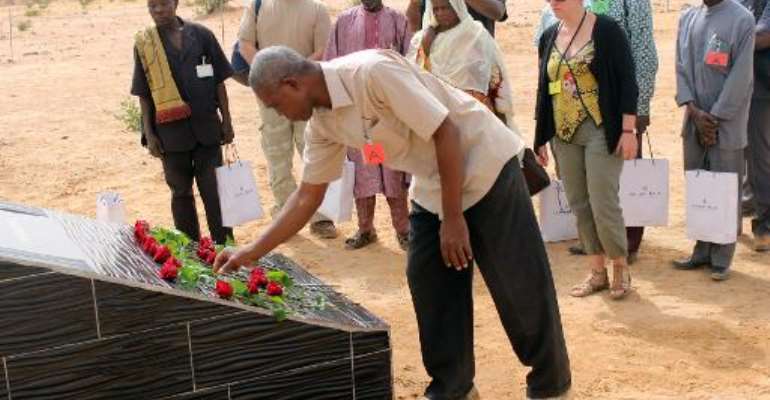 Relatives of the victims of the Air Algerie Flight AH 5017 crash lay flowers on a stele during a memorial gathering for the victims near the crash site in Mali's Gossi region, on April 21, 2015. By Ollo Hien (AFP)

Gossi (Mali) (AFP) - Relatives of 116 people killed in an Air Algerie crash in July visited the scene of the disaster in remote hazardous northern Mali on Tuesday under tight military guard.

Soldiers were on patrol and armoured vehicles were parked in the background as relatives walked between a handful of sand-coloured tents to a monument erected to the victims of Flight AH5017.

The McDonnell Douglas 83 jet took off on July 24 from Ouagadougou in Burkina Faso bound for Algiers, but crashed after its pilots asked to turn back as bad weather struck.

"I lost my entire family," Carine Renault sobbed, breaking down in grief as she reached the memorial stone, set a few hundred yards (metres) from the crash site where twisted black debris remains visible.

Ten of her relatives died in the accident, including her father, mother, brothers and nephews. Along with almost 300 people she was flown from Ouagadougou in Burkina to Gao in Mali in a French troop transport plane, then ferried to the crash site by helicopter.

The area shelters jihadist fighters as well as Touareg rebels.

France bore the brunt of the tragedy, with nearly half of the victims its citizens. Other passengers came from Burkina Faso, Lebanon, Algeria, Spain, Canada, Germany and Luxembourg.

The black box flight recorder showed that the aircraft suffered a "sudden drop" after a "slowdown of its engines" at cruising altitude, which investigators believe may have been triggered by the crew failing to switch on an anti-frost system.

It is likely that the plane broke up on impact after falling out of the sky vertically at an extremely high speed, investigators have said.