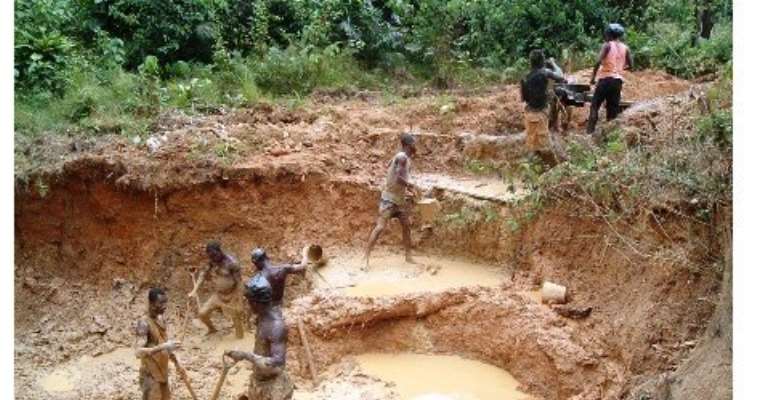 Gold exports from Ghana's small scale miners in 2012 and 2013 amounted to the same volume of production by the three leading mining firms in the country.

Figures from the Minerals Commission indicate small scale and artisanal mining accounted for 34% of total gold production in Ghana, which amounts to 1.6million ounces of gold.

This is equivalent to the total exports of Anglogold Ashanti Obuasi mine, Goldfields Tarkwa and Newmont Gold Ahafo mine.

The State is however losing its resources without compensatory revenue.

There is no mineral royalty payment on the extraction of gold by the small scale miners – an annual â‚µ500million in taxes and royalties is estimated to have been lost to the artisanal mining.

The Mining and Minerals Act 2006, Act 703 does not differentiate between small scale and large scale operations in terms of royalties and both are liable for royalty payment.

The 2012 and 2013 report of Ghana Extractive Industries Transparency Initiative (GHEITI) has recommended that “the rate at which royalty is paid may be differentiated between large scale and small scale holders” whilst royalty payment may be instituted at the point of export for the small scale operators.

Artisanal and Small Scale Mining African Network last year said it was ready to pay royalty to the State, and further asked government to go beyond that to actually tax them.

He observed the failure of the country to make formalization of illegal mining attractive to galamsey operators.

According to him, players in the informal mining sector can be incentivized with support mechanisms, including access to geological data, technical aid - in which a plant pool of equipment can be accessed at subsidized rate.

“If I know that by formalizing my activities I get some support in terms of being able to access venture capital fund to finance my operations, then it becomes attractive to move away from illegal activities into the formal sector; once you've done that then we can identify these groups and tax them appropriately to finance national development,” suggested Dr. Manteaw.