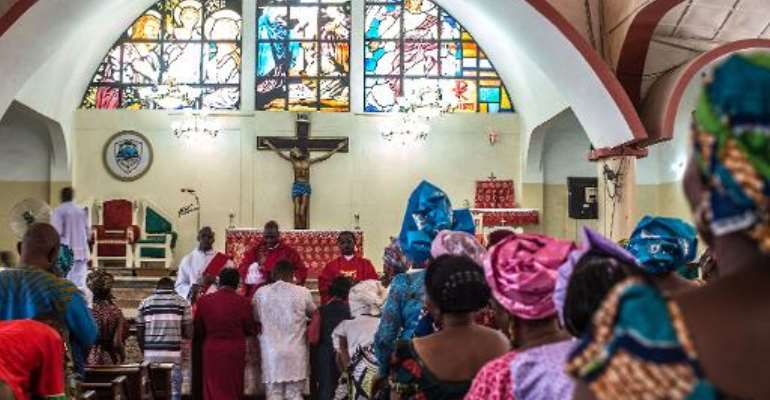 Nigerians attend Sunday mass at Saint Joseph's Cathedral, a rare church in the predominately Muslim area of Kaduna, where peace was preached on March 29, 2015. By Nichole Sobecki (AFP)

Kaduna (Nigeria) (AFP) - A Sunday Mass was faintly audible in the background as Ene Orgha recalled the violence that left her stranded from her home in the city of Kaduna after Nigeria's general elections four years ago.

As the country anxiously awaits the results of Saturday's knife-edge vote, many in the religiously-divided northern city insisted that lessons had been learned since 2011.

Hundreds, including many Christians, were killed in that election after ex-army general Muhammadu Buhari, a Muslim, was declared the loser.

But Orgha, 52, claimed that such assurances were premature, warning that Buhari's supporters were demonstrating a similar attitude to that of 2011, "a mindset that does not allow room for defeat".

She told AFP said she was out of town when the results were announced last time and "couldn't get back to Kaduna... because the problems had engulfed the city".

If President Goodluck Jonathan, a southern Christian, defeats Buhari this year, Kaduna's Christians may again have reason to worry, she warned.

"Why shy away from saying the truth?" she asked on the grounds of St Joseph's Catholic Cathedral, one of several churches in the mainly Muslim neighbourhood known as Kaduna North.

The resentment "is religion based", she said. "Unless we tell the truth, we won't get out of this mess."

Buhari, who lives in Kaduna, had throughout the 2015 campaign refused to discuss the prospect of defeat in his fourth run at the presidency.

A handful of his supporters were lounging outside an office where ballots were being counted on Sunday, finding relief in the shade from the hot northern Nigeria sun.

"I am sure Buhari is going to win the election, not Jonathan," said 41-year-old Abubakar Umar Mandalla.

Asked how he would react if the president was re-elected, the petty trader said "that is not going to happen", allowing only for the prospect that Jonathan would rig his way to victory.

But, despite the absolute confidence voiced by Mandalla and other Buhari supporters in Kaduna, independent observers believe the results are too close to call, raising questions of how the city will react to a Jonathan win.

Mohammad Ali, an Islamic cleric, said "huge gains have been made over the last four years", in terms of mending Kaduna's religious divide.

In 2011, throngs of party supporters had crowded around ballot counting centres and were chanting party slogans, behaviour that many saw as a worrying sign, he added.

By contrast, Kaduna appeared calm, or even empty, on Sunday.

"I don't think there will be any negative reaction from the public, particularly from supporters of general Muhammadu Buhari" if the vote goes Jonathan's way, Ali said.

Shehu Sani, an expert on religious violence in Nigeria who ran for a Senate seat in Kaduna on the Buhari ticket, said despite the best intentions of the area's leaders, post-electoral bloodshed remained a serious risk.

He also insisted that the president could only win by cheating, warning that in such a case calls for peace from the APC may not be enough.

"If the elections are rigged and Jonathan is announced the president people like us will take the road of peaceful protest," Sani said.

"But there are people who will certainly not take the road of peaceful and those people are not those ones who we can control."

There have been reports of southern Christians who live in northern cities leaving their homes through the election period, seeking to avoid any potential backlash against a Jonathan win.

In Kaduna, where many shops are owned by southern migrants, commercial streets were largely closed down but it was impossible to tell which, if any, are normally open on Sundays.

Elizabeth Anthony, a shop-owner in Kaduna from southern Oyo state, said apprehension was high as the ballot counting continued, including among Christians.

"If you to go church, people fear," she said, adding: "It's because of what happened before."