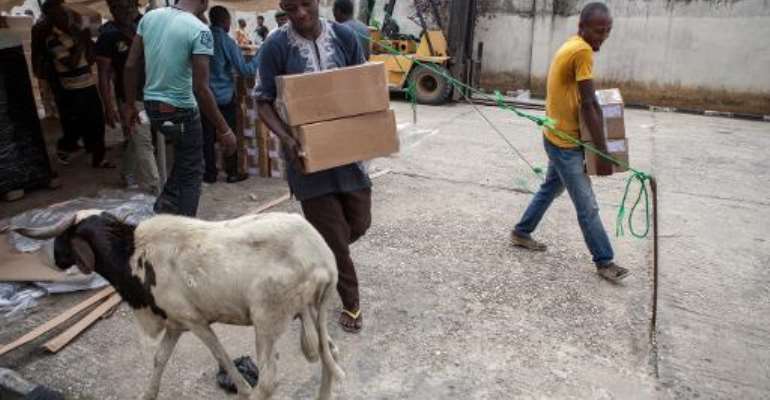 A goat walks past as officials prepare voting materials at the Independent National Electoral Commission offices in Port Harcourt on March 26, 2015, ahead of March 28 presidential elections. By Florian Plaucheur (AFP)

Abuja (AFP) - Campaigning wound to a close in Nigeria's presidential elections on Thursday, with the two leading candidates delivering their final messages to supporters before the crunch vote.

Saturday's election is being seen as the closest race in the country's history, with President Goodluck Jonathan facing a strong challenge from former military ruler Muhammadu Buhari.

Land and sea borders were shut at midnight on Wednesday (2300 GMT) as part of stringent security measures that also include an eight-hour restriction on movement when polling stations are open.

Nigeria has a history of election-related unrest and both candidates appeared keen to prevent a repeat of 2011, when 1,000 people were killed in clashes after the results were announced.

This time round, fears of Boko Haram suicide attacks and bombings at vulnerable targets, including polling stations, have seen unprecedented calls for vigilance from the security services.

Jonathan and Buhari signed a pledge of non-violence in January and on Thursday repeated their commitment to peaceful elections, with the campaign due to formally end at midnight.

"Now that the campaigns have come to an end, we meet to renew our pledge for peaceful elections," read a document signed by the two men at a hotel in Abuja and made available to reporters.

"We therefore call on all fellow citizens of our dear country and our party supporters to refrain from violence or any acts that may in any way jeopardise our collective vision of a free, fair and credible election."

The country is almost evenly split between a Muslim-majority north and largely Christian south, with Buhari and Jonathan traditionally pulling support from their respective regions.

Acceptance of the result is seen as key to preventing violence and the Independent National Electoral Commission said it had been working with the parties to tone down often violent rhetoric.

"All this will add up when the elections are through and the results are announced and we see that they conduct themselves in accordance with the pledges and promises that have been made," INEC spokesman Kayode Idowu told AFP.

Jonathan published a "thank you" message to Nigerians on the front page of many national newspapers, with a 40-page colour pull-out detailing his claimed achievements.

But the president recognised the challenge from Buhari and his All Progressives Congress (APC) which could see his ruling party defeated for the first time since the end of military rule in 1999.

"Right now there are only a few more hours to the election. I cannot recall an election more important than this in the history of our nation and I need your support," the 57-year-old wrote.

"I need you to vote for me in this election, not just because of me, but so that we consolidate on the progress we have made."

Jonathan is campaigning for continuity and has vowed to complete the work he has started in his first four years in office.

Buhari, 72, who headed a military government in the 1980s and describes himself as a "converted democrat", has for his part pushed an agenda of "change".

He criticised "insecurity, broken infrastructure and growing inequality", vowing action against Boko Haram and corruption, which he said had made Nigeria "a laughing stock of the world".

"Rebuilding the army and other security agencies will... be a top priority of my government. I will ensure that never again will terrorists find a safe haven in Nigeria," he added.

He said he would also reunite the more than 200 schoolgirls kidnapped by the group in April last year with their families.

The electoral commission charged with organising the election in Africa's most populous nation meanwhile said it was on track for a smooth operation.

Some 68.8 million voters out of a total population of some 173 million are registered to vote in Nigeria, which is also Africa's leading economy and top oil producer.

Ballot papers and election materials, including for the first time handheld readers to scan biometric voter identity cards, had been sent to the country's 36 states and capital territory.

"Everything is in place," said INEC's Idowu.

INEC has come under scrutiny for its preparedness, even after the initial February 14 vote was postponed because of military operations against Boko Haram in the northeast.

Jonathan's PDP voiced concern about the distribution of voter cards and the card-reading technology.

But Idowu said the election "will be as flawless as humanly possible" and that results would be announced within 48 hours of polls closing on Saturday.