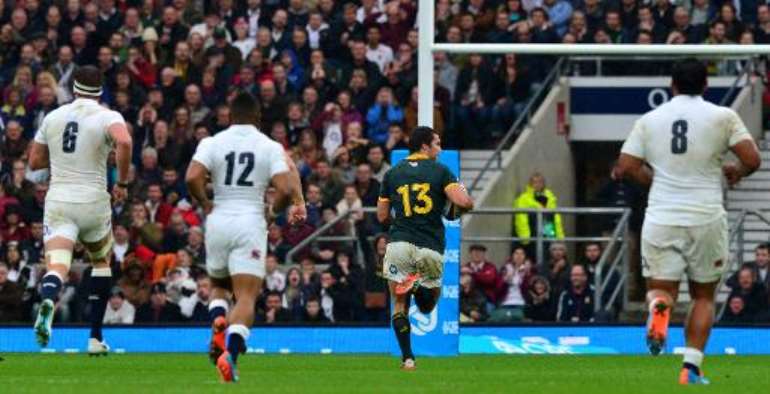 The Springboks bounced backed from their tour-opening 29-15 loss to Ireland in Dublin with a much-improved wet-weather game.

"I'm very proud of the guys because we really adjusted the game plan to the conditions," said Meyer.

"I thought tactically we were very astute."

South Africa were 20-6 up early in the second half but then, with Springbok lock Victor Matfield in the sin-bin, saw their remaining forwards unable to stop England's pack driving over prop David Wilson and replacement No 8 Ben Morgan for a pair of scores that levelled the match at 20-20.

Yet with England, roared on by a crowd of more than 82,000, seemingly revitalised, it was two-time world champions South Africa -- with Matfield still off the field -- who scored next thanks to a try by flanker Schalk Burger.

"Sometimes you have to have a game like this where you do the basics right, ground out a win," said Meyer.

"That's also Test match rugby and, for me, that's World Cup-winning rugby. There's going to be three knockout games and sometimes you have to play like this as well."

Although this was South Africa's 12th Test in a row against England without defeat -- a run including 11 wins -- Meyer said the fact the last three encounters had yielded a draw and wins by a point and now three points respectively, should encourage the Red Rose brigade.

Indeed he even suggested the sides could meet in next year's World Cup final, although they may clash at the quarter-final stage if either fails to win their respective pool but qualifies for the knockout stage as group runner-up.

"I believe they can have a great World Cup and be a team in the final," former Leicester coach Meyer said of England.

"Hopefully, we can meet them in the final at Twickenham.

Meyer, who said he felt "ashamed" after the Lansdowne Road loss, responded to the Dublin debacle by making five changes.

Most significantly, he chose a new half-back combination of Cobus Reinach and Pat Lambie to replace Francois Hougaard and Handre Pollard.

Reinach marked his first Test start with a superbly taken try and outplayed England opposite number Danny Care, winning his 50th cap, in a match where England's forwards had plenty of ball.

However, as South Africa captain Jean de Villiers observed: "It's quality possession rather than percentage of posession that counts."

Meanwhile Lambie, still only 24 but playing his 38th international, guided the Springboks around Twickenham with the assurance of a Test veteran.

In total, he kicked 16 points, including the match-clinching drop-goal that sealed South Africa's victory four minutes from time by putting them two scores ahead.

"Pat's always played well for us end of year, specifically in this weather," explained Meyer ahead of next week's Test against Italy in Padova.

"He's a very level-headed guy and took the right options, especially the drop-goal. It was the right type of game for him and he showed he's a match-winner."

Reinach, labelled a "revelation at nine" by Meyer, stunned England with a superb try less than a minute into the second half.

Lambie's well-judged chip ahead was gathered, at pace, by full-back and IRB player of the year nominee Willie Le Roux, who then delivered the scoring pass to Reinach, the son of late Springbok wing Jaco.

"That's where the game is going," said inside centre de Villiers.

"Turnover ball, open, broken-field play and being able to get your 'X-factor' guys into it, guys like Willie, who can really turn on the magic on.

"It was a fantastic offload and Cobus Reinach, in his first start for South Africa, scoring a try.

"His dad was a Springbok and I think he would have been very proud of him tonight."