Stars come together for new Band Aid single against Ebola 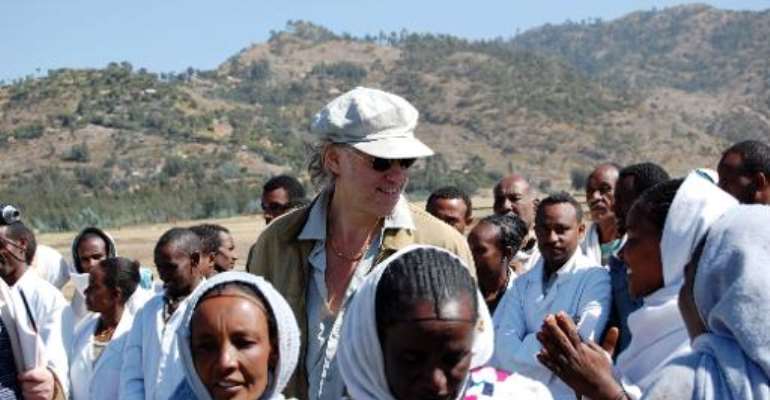 A picture taken on November 25, 2009, shows founder of the Band Aid charity Bob Geldof (C) with local people during a visit to Korem in Ethiopia. By Aaron Maasho (AFP/File)

London (AFP) - Bob Geldof on Monday announced a 30th anniversary version of the Band Aid charity single "Do They Know It's Christmas?" with U2 frontman Bono, Coldplay's Christ Martin and One Direction joining to raise money to fight Ebola.

It will the fourth incarnation of the song, which became one of the world's biggest-selling singles ever after its release in 1984 to raise funds for famine relief in Ethiopia.

Ebola "is a particularly pernicious illness because it renders humans untouchable and that is sickening," Geldof said at a London press conference with Midge Ure, who co-organised the first Band Aid with the Irish singer.

"Mothers can't comfort their children in their dying hours. Lovers can't cradle each other. Wives can't hold their husbands' hands. People are chased down the streets because of it -- and it could come our way," Geldof said.

The rocker-turned-activist said he had been spurred into action not out of nostalgia but by a call from the United Nations three weeks ago, concerned about not having the necessary funds to combat the epidemic.

The Ebola outbreak in west Africa has claimed almost 5,000 lives, according to the World Health Organization -- almost all in Liberia, Guinea and Sierra Leone -- while the number of infected cases registered worldwide has soared to more than 13,000.

The vocals will be recorded on Saturday at Sarm Studios in west London, just as on the original recording.

The sleeve artwork will be done by British artist Tracey Emin and the single will be available for download on November 17, with physical copies three weeks later.

Geldof said he thought the British government would agree to drop the tax on sales, and called on people to buy it rather than watching it for free on the Internet.

Ure, the frontman of Ultravox, said: "It's a record none of us want to make and I wish it wasn't necessary".

The lyrics have been tweaked to reflect lush, economically developing west Africa in 2014 rather than the barren Ethiopia depicted 30 years ago.

Geldof also said there would be French, German and US versions featuring artists from those countries.

However, there will not be a giant "Live Aid" concert, because there was no "political logic" to doing one, he said.

The Dubliner slammed certain countries for not doing enough to contribute to the level of Britain, France and the United States.

"If these countries claim global leadership, then they must accept the responsibility of those things," the 63-year-old said.

The original 1984 version, with Phil Collins, George Michael and Sting, was re-recorded with new artists in 1989, and again in 2004 for Sudan's troubled Darfur region.