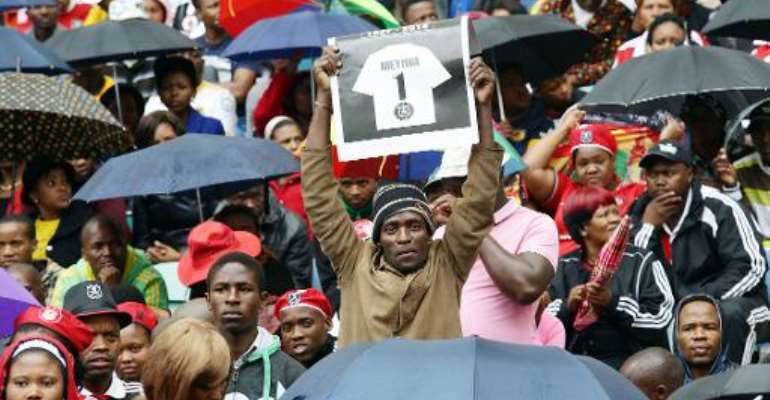 A fan gestures as thousands of South Africans brave the rain and cold weather to gather at the Moses Mabhida stadium to pay their final respects to the late Senzo Meyiwa, during his funeral in Durban on November 1, 2014. By Rajesh Jantilal (AFP/File)

Johannesburg (AFP) - Orlando Pirates lost a South African League Cup semi-final this weekend when they played for the first time since goalkeeper and captain Senzo Meyiwa was murdered.

SuperSport United triumphed 2-0 at the Orlando Stadium in Soweto against grieving opponents who improved in the second half after being lucky to trail by only two goals at half-time.

Meyiwa, who also captained the national team, was gunned down on October 26 during an armed robbery at a house in a township south of Johannesburg.

The popular 27-year-old star had been visiting his girlfriend when he suffered a fatal wound in the back and the murder stunned a crime-weary nation.

Reserve shot-stopper Brighton Mhlongo replaced Meyiwa as goalkeeper and midfielder Oupa Manyisa took over as captain on an emotional night for the former African champions.

Pirates' Serb coach Vladimir Vermezovic said: "Brighton did a good job and could not be faulted for the goals.

"He is going through a difficult time having been a close team-mate and friend of Senzo. Brighton tells me he is fine, but I know that deep down he is suffering.

"I do not want to use the murder of Senzo as an excuse for losing -- the players tried but the victory we dreamt of was not possible.

"We made mistakes during the opening half and failed to take our scoring chances when we improved after the break."

Pirates' players huddled and prayed before the kick-off on a wet, stormy night and many struggled to perform at their usual level during the opening 45 minutes.

SuperSport are a revitalised side since ex-South Africa coach Gordon Igesund replaced Cavin Johnson after a loss-riddled start to the season last August.

Chasing a seventh win in eight league and cup outings, Pretoria-based United took the lead midway through the opening half and were two goals ahead on 36 minutes.

The first came when a Clayton Daniels header off a corner rebounded to Lebogang Manyama, who fired the ball past Mhlongo from point-blank range.

Manyama turned creator for the second, sending a low cross into the goalmouth and Togo midfielder Dove Wome slid the ball into the net at the far post.

SuperSport should have had a third goal before the break with big-screen replays showing a David Mathebula goal was wrongly ruled offside.

Title-holders Platinum Stars will play SuperSport in the November 29 final after edging favoured Mamelodi Sundowns 1-0 in the other semi-final in north-west mining town Rustenburg.