Ghana Is Presently At The Cross-Road 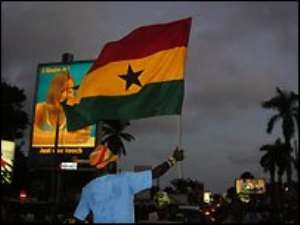 The prevailing economic, political and industrial standoff in the country is not an accident; it was brought about by an out of control and corrupt, “Political Kleptocratic Oligarchy” that controls the ruling party.

Given that from January 2013, the failure of the majority in parliament/NDC government to accept that they continue to bleed politically and this has led to a series of desperate acts of political bullyism, spiteful actions and the reckless squandering of taxpayers' money that have exacerbated the financial hardship of the masses.

What are we see or experiencing?

The Mahama/NDC cabal has and continues to close deals, using the resources of the people like as if they are running a confectionery shop. Why is the NDC playing politics with the lives of hard working Ghanaians? Why is the NDC offering these workers slave-like posturing as if they are plantation workers? Most Ghanaians have concluded that the cabal is only concerned with their own well-being.

Each day brings about another damaging corrupt scandal from controversial back-room deals that will never stand the scrutiny of any proper procurement process. If one is to observe all the NDC-led contracts they have common traits – no competition, a family member or a friend of the party gets the deal, and a one-man procedure sits somewhere in the background as the benefactors or financial engineers of the deal and they all are quoted at multiples of the real market value for a similarly structured deal. In everyday sayings or language – it is wholesale theft from the people.

Despite the fact that the ordinary citizens continue to be emotionally devastated under the heavy burden of huge increases in the cost of living, deteriorating real value of their wages and a 17.5% VAT; the kingpins in the cabal and their baron friends and relatives go on to make more and more money off the backs of those whom the government has abandoned.

How did we get here in 2014? Why did we allow Ghana to descend to this level after John Agyekum Kufuour and NPP started the process of economic recovery during the intervening period so ably pursued after opting for HIPIC?

The answer is Ghana has a very corrupt, greedy and selfish regime that will not stop until its members and their friends covet all of the country's resources.

The ongoing Labor unrest in the country depicts how frosted the relation between Government and Labor could be weighed. Loss of trust!

Discerning citizens of our dear country must know and understand that corruption and propagandist politics have made Ghana a poorer country in the comity of nations. This is why Ghanaians are seeking to migrate en masse to any country in search of work that this country and regime is unable to provide.