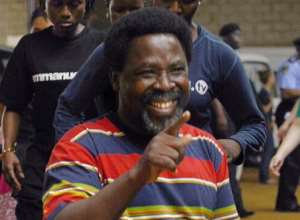 Lagos (AFP) - A guesthouse that collapsed at the Lagos megachurch of one of Nigeria's most popular preachers, killing 116, did not have planning approval, a building inspector said on Thursday.

Lagos State commissioner for physical planning Olutoyin Ayinde also said that several other structures on the site of TB Joshua's Synagogue Church of All Nations (SCOAN) were sub-standard.

They included the vast main auditorium of the church, which Joshua describes on his website scoan.org as an "architectural masterpiece" designed by the Holy Spirit.

"By our records, the collapsed building does not have approval," Ayinde told a coroner's inquest into the September 12 tragedy, which claimed the lives of 84 South Africans.

Joshua, known to his followers as "The Prophet" or "The Man of God" because of supposed miracle-working and clairvoyant powers, has claimed the building fell because of sabotage.

But engineers have indicated that the addition of extra floors without strengthening the foundations caused the collapse.

Ayinde said the main auditorium of the church, to which thousands flock every week to hear Joshua's sermons, had been given approval for five floors on January 1, 2004.

But subsequent inspections had determined that three extra floors were being added, in contravention of the approval, he said, calling the auditorium "structurally defective".

"The ongoing construction on the existing five floors to eight is not being professionally executed," he told the hearing.

"During our visit, we saw a column being erected on a water tank. It shows that building professionals are not used."

State government inspectors also discovered a number of other unapproved structures on the sprawling church site and had stopped further development.

"By the additional construction we saw on site, we are inclined to express fears."

On the collapse of the guesthouse, Ayinde said he had reviewed security camera footage released by SCOAN officials which they claimed showed a low-flying aircraft above the building.

Joshua has suggested that the aircraft -- and up to three others seen in the same position in the hour leading up to the tragedy -- was linked to the collapse.

But Ayinde said it was "not hovering" over the building as claimed.

"It was within its flight corridor. It was moving on its directional path and an area of the airport," he added.

It was possible there were four different aircraft because the church compound is on the flight path into Lagos international airport, he added.

Lagos surveyor-general Joseph Olorunjuwon Agbenla also ruled out sabotage, saying the aircraft was flying too high above the guesthouse.

The inquest was adjourned until November 5, when Joshua has been summoned to give evidence.