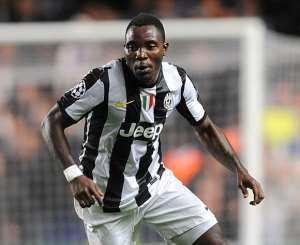 The French full-back is expected to be out for up to a month with a hamstring injury.

Evra was not involved in Saturday's 2-0 win over Palermo.

The ex Manchester United star appear to be the presence of new Juventus manager Massimilaino Allegri to Kwadwo Asamoah who was very effective under Antonio Conte.

His limited first team opportunities has even led to heightened reports he could be heading towards the exit of the Italian champions by next summer.

Allegri will now be forced to use the Ghana international regularly following news of Evra's injury.

This also means Asamoah could emerge the undisputed first choice if he impresses during this period before the return of the French left-back.