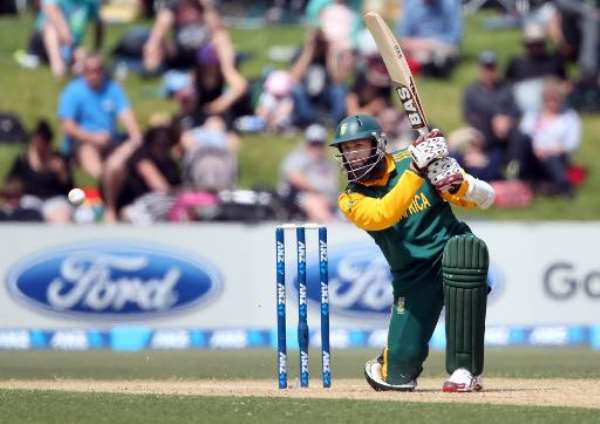 In a see-sawing match, the Proteas initially blunted the Black Caps attack then endured a late batting collapse that restricted them to 282-9 before skittling the home team for 210 with 21 balls to spare.

The win gives the tourists an unassailable 2-0 lead in the three-match series and AB de Villiers' men could snatch the world number one ODI ranking from Australia if they complete a 3-0 whitewash in Hamilton on Monday.

Amla rode his luck before finishing with 119 off 135 balls after South Africa lost the toss and were put in to bat, with Faf du Plessis contributing 67 and captain AB de Villiers 37.

The Proteas then lost six wickets for 25 runs in the dying stages of the innings, including four in the last three overs.

But by then the damage was done and South Africa had a target that left New Zealand's weakened batting line-up little chance with wicketkeeper Luke Ronchi's 79 the highlight for the Black Caps.

"It was a bit frustrating at the end... it turned out to be a long innings for us bowling-wise but the first 35-40 overs I can't fault," de Villiers said after his attack eased up with New Zealand on the ropes and victory in sight.

The hosts' meek batting display, which followed a similar capitulation at the same ground earlier this week, will set alarm bells ringing as New Zealand prepares to co-host the World Cup with Australia early next year.

"It wasn't great, there was a real lack of craft again with the bat," skipper Brendon McCullum said. "We showed a little bit of backbone at the end but far too little too late."

The Black Caps boosted their fast-bowling stocks with the addition of a fit-again Tim Southee and Mitchell McClenaghan, but it began as a frustrating day for the pacemen.

Amla was let off the hook when he edged Southee on five, only for wicketkeeper Ronchi and Tom Latham in the slips to let an easily catchable chance sail between them to the boundary.

He received another life two overs later skying a short Southee delivery, but Dan Vettori failed to come in from the boundary to claim another gilt-edged chance.

Amla forged a 113-run partnership with du Plessis, then worked with de Villiers as his captain racked up a quickfire 37 off 25 balls.

Amla brought up his 16th ODI century off 127 balls and finally departed in the 45th over when Southee clean-bowled him as he shaped to add another boundary to his 15 fours.

The Proteas fell apart in his absence, with Southee, McClenaghan, Trent Boult and Corey Anderson all taking two wickets apiece for New Zealand.

South Africa's effort in the field began poorly when a mix-up between de Villiers and Dale Steyn squandered the opportunity to catch Martin Guptill on two, although it proved a minor setback as the Black Caps top order crumbled.

Openers Guptill (11) and Neesham (10) failed for the second time in as many matches, and wickets continued to tumble until New Zealand were 134 for nine.

Ronchi, who scored 99 in the first match, chiselled out a 76-run partnership with Mitchell McClenaghan (34 not out) but by that stage the game was beyond the hosts.