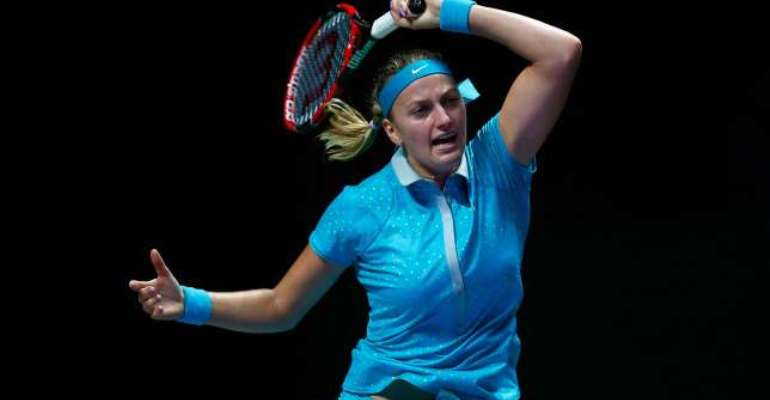 French Open champion Sharapova lost a marathon first White Group match against Caroline Wozniacki on Tuesday and looked tired as she was beaten 6-3 6-2 by Kvitova in Singapore on Thursday.

The Russian can still progress to the semi-finals with one match against Agnieszka Radwanska remaining, but qualification is now out of her hands as Wozniacki beat Radwanska earlier in the day to make it two wins out of two.

Wozniacki would have been the first player to be guaranteed a place in the last four if Sharapova had prevailed against Kvitova, but the Dane was made to wait after the Wimbledon champion ended her poor run of form against the 27-year-old.

World number three Kvitova had lost her previous five matches against Sharapova, a run stretching over three years, but produced a ruthless display to secure her first victory in the season-ending tournament after losing to Radwanska in her opening match.

Sharapova had made a promising start as she broke the Czech in the first game of the match, but Kvitova battled back to leave the Russian rattled as she broke to level at 2-2 and then won the next three games.

Kvitova was moving far more freely and Sharapova had no answer, as the 24-year-old completed her first-set comeback to winning the second set point that came her way.

And Sharapova was unable to respond in the second set, with Kvitova pressing home her advantage by winning three of the five break points that she earned.

Sharapova looked stunned as Kvitova reeled off the first five games in the set and although she finally got on the board to trail 5-1 and then saved two match points in the following game, it was only a matter of time before she was consigned to defeat.

Kvitova duly served out the match to end Sharapova's misery and get up and running in the showpiece tournament.