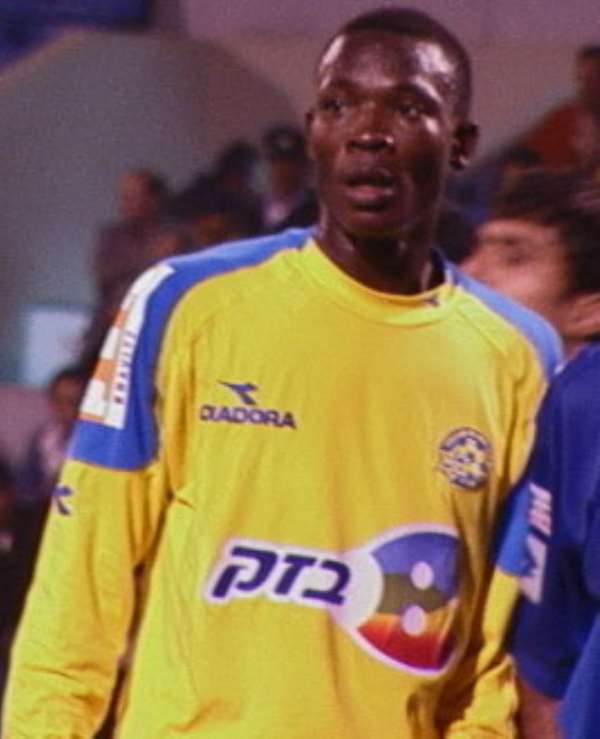 The player who ply's his trade with Maccabi Tel Aviv in Israel is said to be heading towards uneasy days following the clubs threat to expel him if he is unable to prove his innocence in the alleged case. The GNA Sports has gathered that the player is said to be under regular fire from his club to explain his role in the alleged theft case or face the music.

The worried Painstil told the GNA from his Israeli base on Tuesday that, "My club told me about their preparedness to go as far as to FIFA to get me sanctioned if I am unable to explain why Bortey implicated me in the theft".

The player said the Israeli press is also on a field day as far as the story is concerned, adding that, "no single day passes without one reading and hearing about me in bad light".

Painstil explained that the club's action stemmed from an alleged denial in an interview that Bortey granted some Tunisian and Ghanaian Press, which implicated him in the process.

The Hearts striker has reportedly denied the thievery and told Joy FM, an Accra based radio station on Monday that Painstil fabricated the story out of hatred.

But Painstil denied Bortey's innocence, daring him to prove to the whole world why "He knelt in my car and begged me to let the issue stay between us when Maccabi confronted him on the issue knowing he did not steal the money".

The hardworking player issued a nine-hour ultimatum to the striker to either come public and explain himself or face his wrath. He told the GNA Sports that he was poised to fight the case to its logical conclusion "To clear my name if it means coming home earlier than expected."

He recalled how Bortey managed to sneak into the dressing room of Maccabi and made away with 3000 shackel which is equivalent to about 3.6 million cedis and kept it in his boot which he hid in his (Painstil's) car.

The Maccabi star challenged Bortey to come clean and explain "why he was left off the hook after he was nearly arrested, if he still insists he did not steal anything on the eve of his departure to Ghana. It will be recalled that Bortey made the news in recent times with the alleged theft whilst on trials with the Israeli club a few weeks ago.

The story, which first surfaced from the Internet, implicated the Hearts striker and his alleged deportation from Israel.

The player has however denied the story calling it a calculated attempt by Painstil to tarnish his reputation.

When Bortey was contacted on phone for his reaction of the allegations, he said that he was not ready to neither comment on the issue nor talk to the media or any radio station.

You'll be sacked if you fail to up your game– Asamoah Boaten...
4 minutes ago