Ghanaian midfielder Buaben gets extended trial at Scottish side Hearts 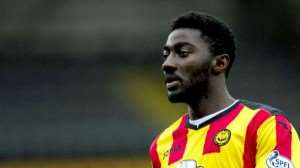 Scottish side Hearts are to take a closer look at Ghanaian midfielder Prince Buaben after the former Dundee United player impressed in training.

Buaben, available after leaving Carlisle United this summer, joined Hearts in Leigh, near Manchester, at the weekend.

He played 45 minutes in the 2-1 victory over Dinamo Bucuresti on Sunday and will now travel to Edinburgh to allow Neilson a closer look at the 26-year-old.

Hearts have friendlies against Hamilton on Wednesday, and East Fife on Saturday, in which Buaben will hope to be involved.

However another trialist, Lee Currie, has been told he will not be offered a contract with Hearts.

Currie, 24, left Berwick Rangers this summer looking for a return to full-time football.

The playmaker has trained with Hearts since they returned to pre-season but Neilson has told the former Hibernian youth academy graduate he is not part of his plans for the season ahead.