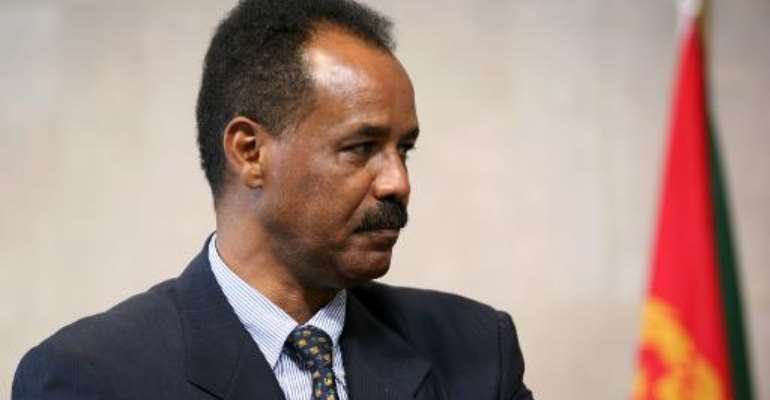 Eritrean President Issaias Afeworki seen at a press point at the end of a meeting on May 4, 2007 at EU headquarters in Brussels. By Gerard Cerles (AFP/File)

Stockholm (AFP) - A Swedish law firm Tuesday reported several top Eritrean leaders to the police for crimes against humanity, as a new law took effect enabling such crimes committed anywhere else in the world to be prosecuted in Sweden.

The report lists a series of alleged crimes including torture and kidnapping, and targets Eritrean President Issaias Afeworki and several of his ministers by name.

"This is not only symbolic. We believe there are legal grounds to prosecute the people we have named," human rights lawyer Percy Bratt told AFP.

The legal move was the first of its kind in Sweden, filed the same day that crimes against humanity were introduced into the Swedish penal code.

The code enables judges to prosecute crimes regardless of where they have been committed or by whom.

"There is a lot of evidence from human rights groups, particularly about indefinite imprisonment without trial (in Eritrea)," said Bratt.

"There are also many Eritreans in Sweden who could give information about the conditions in the country in general."

According to the latest figures, 12,800 Eritreans live in Sweden, and the number of asylum seekers from the country keeps growing.

Swedish-Eritrean journalist Dawit Isaak has been imprisoned in Eritrea since 2001, and 13 years on little is known of his fate.

Bratt said if even the case is taken up by the prosecutors, it could take years before criminal charges are laid, given the complexity of the cases.

Eritrea, with a population of five million and a size about the same as Britain, is one of the most isolated and secretive countries in the world.

According to the United Nations, 4,000 Eritreans flee the country every year to escape ruthless repression, including unlimited forced labour for the government.