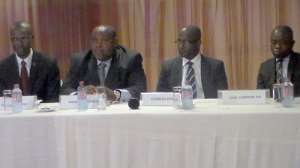 The Ghana Real Estates Development Association (GREDA) has expressed its dissatisfaction with the abysmal planning of urban areas across the country.

The Executive Director of the Association, Sammy Amegayibor, who made this known in Accra yesterday at the launch of the 5 th edition of the MultiTV/HFC Bank Habitat Fair 2014, said government had failed to effectively plan Ghana's cities.

According to him, there had been a lot of haphazard planning by city authorities in recent times that have affected human lives and the general outlook of the nation.

'There are a lot of haphazard planning that have affected our cities in recent times,' he said, adding that the collapse of the Melcom Mall and a building at Nii Boi Town showed the ineffective planning and execution of housing projects in the country.

In line with this, he called on the government to do what he described as 'appropriate and effective planning before execution of housing projects across the country.'

Mr. Amegayibor also called on the government to establish a national housing authority that would be empowered to deal with housing issues and housing deficits in the country.

He disclosed that GREDA would soon unveil a journal titled: 'GREDA Real Estate' to create awareness on proper planning of houses.

The Deputy Minister of Water Resources, Works and Housing, Sampson Ahi, in an interview with the press shortly after the launch, blamed municipal authorities across the country for the poor planning of cities.

He stated that the responsibility to plan cities is the sole prerogative of municipal authorities, which other government institutions could not interfere with.

According to him, housing projects that were started by the previous Kufour administration were being completed by the current John Mahama government to address the challenges facing many Ghanaians.

Today, we have a housing deficit of about 1.7 million and the government of Ghana is working hard to address this issue, Mr Ahi stated.

He disclosed that Cabinet had given approval for the Real Estate Bill to be presented to Parliament for approval.

Meanwhile, Charles Bonsu, General Manager in Charge of Consumer Loans at HFC, said the fair is the only platform available in the country to allow players in the housing industry to come together to  transact business.

He noted that the bank had been the headline sponsor of the fair for the past four years, adding that 'we are still committed to financing this noble initiative.'

According to him, the fair is expected to start on 3 rd August, 2014, adding that it attracted over 20,000 individuals last year.

This year's edition is expected to be a one-stop shop for all habitat needs, said Ebo Morrison, Sales Manager of MultiTV.