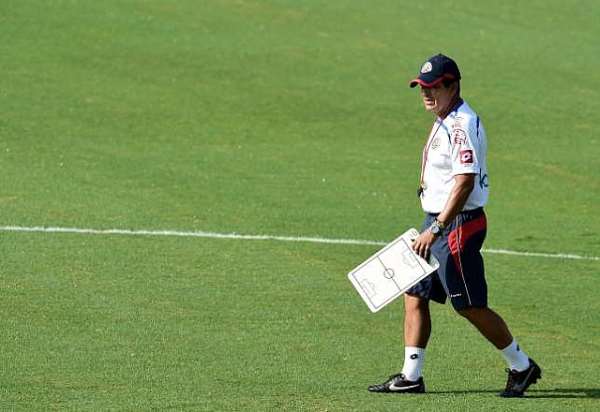 The two Group D teams will go head-to-head in Recife on Friday, with the winner guaranteed a spot in the round of 16 at the showpiece event.

Deputising as Italy captain in the absence of injured goalkeeper Gianluigi Buffon, Pirlo was at his brilliant best in the 2-1 win against England - teeing up Claudio Marchisio for the opener, while he fired a late free-kick into the crossbar.

And Pinto said stopping the 38-year-old midfielder, who had 108 passes in Italy's first game, will be key to achieving another upset after Costa Rica's triumph 3-1 win over Uruguay.

"If Pirlo is ok, he is going to be a problem because of his positioning and his skills with the free kicks.

"Pirlo is the most important Italian player along with (Antonio) Candreva. (Daniele) De Rossi would be the third. We have analysed them.

"I have been following him (Pirlo) since Germany 2006 where I think he was the best player in this World Cup. He is the most intelligent player they have.

"We have seen many of his characteristics, so we have to know how to stop him because he is the brain of Italy."

Pinto also hit back at Chelsea manager and Yahoo Sports columnist Jose Mourinho, who believes Costa Rica have already produced a surprise result and are "unlikely to do it a second time".

"I am surprised by (Jose) Mourinho's words. So when he plays Sunday-Wednesday games he can't repeat good results? No way.

"We expect to do our best. We do know we have a tough rival in front of us, but we are confident we can do it again."

Pinto added: "Our first game with Uruguay wasn't an easy one, but we managed to overcome them. Therefore, we are happy today.

"In terms of football, we want to repeat the things we did against Uruguay. However we know we are facing a difficult opponent, very tactical, very competitive.

"We know we have to pay a lot of attention to them. At the moment I am in a kind of game with (Cesare) Prandelli, if he guesses my line up or if I manage to guess his, so depending on that there are some key decisions."