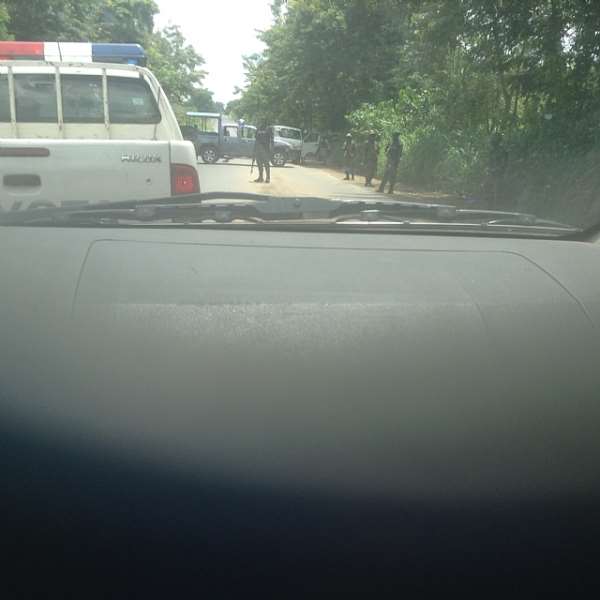 The Rivers State Government has expressed concern about the safety of Governor Amaechi who is right now being held hostage in a commando style by soldiers and federal government security agents in Odudu, Ondo state.

Governor Amaechi as Chairman of the Nigeria Governors' forum and as an APC governor and chieftain had left Port Harcourt yesterday's morning for Ekiti state where he was to join his brother governor in his last mega rally before the elections.

A press statement to NF-Reports by Ibim Semenitari, the Commissioner of information explained that:

'Governor Amaechi was ambushed and refused entry into Ekiti by military personnel acting on orders from above. He made to turn back and return to Akure where his chattered aircraft was parked but was chased and rounded by armed soldiers and security personnel in Odudu, Ondo state. According to the captain who led the operation, he had orders not to allow the governor entry or exit.

'In the meantime, the chattered aircraft that conveyed the governor has been grounded while the minsters of Defence, police Affairs and Minister of state for Defence have landed the Akure airport.

'The Rivers State government is especially worried that Federal government and President Jonathan have singled out Governor Amaechi for harassment and attack.

'The Rivers state government is all more worried as Ondo saga is coming on the heels of a plot by six PDP lawmakers this morning to carry out a kangaroo impeachment of the duly elected governor of Rivers State, Rt. Hon Chibuike Rotimi Amaechi, con first at Krisdara Hotels and later Bauchi Street, Port Harcourt.

'Ordinarily such banality should be ignored as it neither is legal nor constitutional. However in the light of the recent attempts to hoist a Chief Judge on Rivers people through the back door and the attendant rumours that the reason for that desperate act was to make it easier for the PDP to actualize its sinister daydream of ousting Governor Amaechi before May 29, 2015, we believe that it has become necessary to draw the attention of Rivers people, Nigerians and the international community to the situation in Rivers State.

'Only yesterday, in preparation for this tragicomedy, the Rivers State chapter of the Peoples Democratic Party (PDP) accused Governor Amaechi of importing terrorists into the state and the region. They continued their diatribe by demanding that the governor of Rivers State be put under surveillance. The State Government wouldn't have dignified the PDP's display of ignorance with a response but for the fact that these accusations coupled with today's actions are omniuos signs of how far the PDP is willing to go in its quest to cling onto power by all means.

'The antecedents of impunity on the part of the leadership of the PDP are instructive and the party's desperation to harm and stop anyone they perceive as major threat to their crumpling electoral fortunes next year is no longer news. The detention attempt and incident at the Kano International Airport last week are still fresh in the minds of Nigerians. Also, the call to put Gov Amaechi under surveillance (or is it house arrest?) on the same day that PDP started effort to unseat the Governor of Adamawa State, His Excellency, MurtalaNyako, is enough indication of the script already written by a jittery PDP

'It is sad that the insane minds of the authors of the PDP accusation are jeopardizing police investigations of the 486 travellers who were intercepted in Aba, Abia State, and who are still being screened. One only wishes that the PDP would address the issues of the insecurity in the country with as much fervor and vigour as it deploys towards witch hunting its political opponents

'The River Government wishes to state that the world knows those who feather the nest of cultists and militants and for whom they are cannon fodder. Governor Amaechi's position on cultism, violence and insecurity are clear as is his commitment to fighting poverty and improving the lives of our present and future generations.

The Rivers State Government will not be deterred in its efforts to deliver good governance and democratic dividends to our people.

'We appeal to all Rivers people appeals to all members of the All Progressives Congress (APC) and citizens in the state to remain calm in the face of these provocations.

'We call on the Security Agencies to exhibit professionalism in their conduct of affairs. We appeal to all well-meaning people in Nigeria and around the world to please call the PDP to order before they truncate our democracy.

'It appears to us that the PDP clearly have no interest in the peace and stability in Rivers state.

We are mindful of these mischievous elements but continue to call for tolerance and eternal vigilance. We are certain that the God who reigns in the affairs of Rivers people will again deliver us from this evil and terror that stalks us at noon day'

Meanwhile, the Rivers State Chapter of All Progressives Congress has called for the arrest of Mr. Jerry Needam, Spokesperson of Mr. Felix Obuah and Rivers State Chairman of the Peoples Democratic Party for alleging that Governor Chibuike Amaechi was the brain behind the current influx of the suspected terrorists to the Southern part of Nigeria.

According to Mr. Needam in a statement issued in Port Harcourt on 18thJune, 2014, 'Rotimi Amaechi is responsible for the recent mass influx of suspected Boko Haram members into South-Southern and South-Eastern states of Nigeria.'

'To us, this is a very grave allegation that requires the immediate attention of the security agencies so as to prevent the menace of Boko Haram spreading to the South, having seen the damage the sect has caused to the security and economy of Northern Nigeria. Mr. Needam should help security agencies with further information on how Governor Amaechi sponsored the movement of these suspected agents of destruction down to the South because to us, Governor Amaechi is a fighter against insecurity and not a promoter of insecurity as painted by the demented Aide to the PDP State Chairman. If he fails to do so, he should be cautioned accordingly to avoid such charlatans from doing much damage to the peace of our nation.

'Boko Haram is not something to be joked with. It is a serious issue that should not be frivolously used to tarnish the image of political opponents. For Mr. Needam to accuse a Governor who has been doing his best to sustain the peace in his state since assumption of office in 2007 - rescuing Rivers State from the menace of militants and even ordering two helicopters to assist security agencies in securing our State - of sponsoring the influx of miscreants to the Southern part of Nigeria in order to cause mayhem is very unfortunate.

'It is on record that Governor Amaechi was recently awarded the Best Governor on Security in Nigeria by the Nigeria Security Profile Award (NISPA). For Mr. Needam to turn round to accuse the same man of promoting insecurity simply demonstrates how empty he and those he is working for are. The security agencies should arrest and get him to substantiate his bogus allegation. Anything short of this would encourage charlatans like him further heat up the polity by making unguarded and frivolous allegations aimed to demonise innocent public officers', Rivers APC concluded.