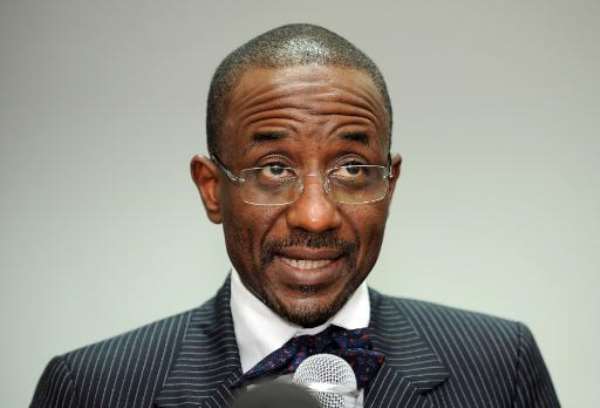 Kano (Nigeria) (AFP) - Nigeria's new Muslim monarch, the Emir of Kano, was sworn in on Monday, after a second day of violence fuelled by suspicions that politics, not religion, was behind the appointment.

Thousands of well-wishers turned out at the Kano state government headquarters as Sanusi Lamido Sanusi was given his official letter of appointment to the influential role by governor Rabiu Kwankwaso.

Former Central Bank of Nigeria (CBN) governor Sanusi's nomination on Sunday sparked violence in the northern city, as supporters of the late emir's eldest son took to the streets armed with sticks and stones, setting fires in protest.

The violence worsened on Monday, as they clashed with supporters of Sanusi and Kwankwaso, who had turned out in their hundreds wearing white robes and red caps to march on the seat of state government.

The post of Emir of Kano -- the second-most senior Islamic leader in Nigeria -- holds major influence across the country's Muslim-majority north and has traditionally been above politics.

But with Sanusi having been suspended in February for alleging corruption at the heart of government and Kwankwaso a leading member of the main opposition, many saw his appointment as political.

Sanusi, dressed in white royal robes and a turban, vowed before an audience of Muslim clerics, senior members of the Kano emirate, community leaders and local officials that he would uphold Muslim values.

But the 52-year-old said he did not believe the clashes were linked to the late emir Ado Abdullahi Bayero's son, who was seen as his main rival for the post.

None of the late emir's seven sons were present at the ceremony, however, fuelling further rumours of a rift.

"I believe no son of the emir will instigate people into lawlessness," the former central banker told the audience.

"We are the same family, our parents are the same. With Allah rests all power and He gives it to whoever he wishes.

"We should not allow outsider to divide us. Those organising this riots are not part of the Kano royal family."

Kwankwaso, who approved the recommendations of royal courtiers, also dismissed insinuations that the appointment was politically motivated, saying it was based on competence alone.

The ruling Peoples Democratic Party (PDP) of President Goodluck Jonathan is said to have backed the late emir's son while the main opposition All Progressives Congress (APC) supported Sanusi.

The APC is expected to push the PDP close at next year's elections and has been boosted by the defection of several influential state governors, including Kwankwaso, as well as lawmakers in parliament.

Sanusi's revelations that the state-run oil firm misappropriated $20 billion in public funds were seen as the reason for his suspension on government charges of "financial recklessness" and misconduct.

Jonathan has yet to formally congratulate Sanusi on his new role and having a high profile government critic on its side may bolster the APC's election prospects in the north, analysts said.

Dapo Thomas, a political scientist at Lagos state university, said: "Although he is supposed to be apolitical, Sanusi's choice may indirectly affect the political fortunes of the PDP and the president, given the frosty relationship between them.

"Sanusi was sacked as CBN governor and I am not sure he can easily forgive Jonathan and his party for that.

"As a traditional and religious leader, an emir wields a lot of influence among the people and this may not augur well for the president and the PDP," he told AFP.

Ado Abdullahi Bayero died on Friday aged 83 after a long battle with cancer.

He, Nigeria's senior-most Muslim leader, the Sultan of Sokoto, and the number three, the Shehu of Borno, had all come under pressure to speak out more against the threat posed by Boko Haram Islamists.

The emir and the shehu both survived assassination attempts by the group, who were angered at their perceived cooperation with Nigeria's secular government.