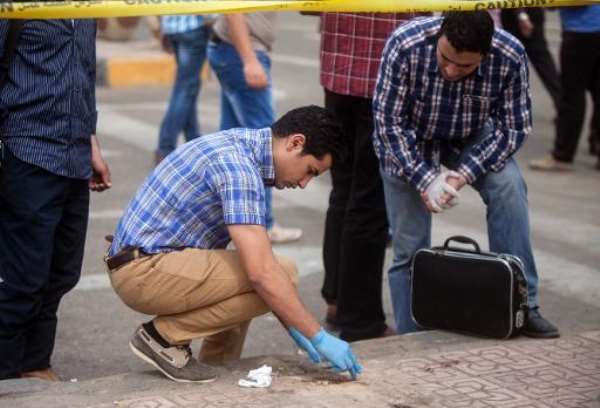 The first attack blew the roof off a shelter manned by traffic police at a busy intersection in Al-Galaa Square in the Egyptian capital's Dokki neighbourhood.

It was unclear whether the bomb, which exploded in the early morning, was planted at the site or thrown by assailants.

Two policemen and a civilian passerby were lightly wounded in that attack in the Dokki business and residential area, security and medical officials said.

A police car which was destroyed in the blast was being examined, a security services official said.

Egypt has been rocked by a series of bombings and shootings carried out by militants since July, when the military ousted Morsi, the country's first civilian and elected president.

The authorities installed by former army chief Abdel Fattah al-Sisi quickly moved to repress Morsi's supporters after his overthrow, and in an ensuing crackdown more than 1,400 people have been killed.

More than 15,000 Islamists, mostly from Morsi's Muslim Brotherhood, have also been jailed, while hundreds have been sentenced to death after what are often speedy trials.

The authorities say militants have killed about 500 people since the overthrow of Morsi in what is seen as retaliation for the crackdown.

Most militant attacks have been in the restive Sinai Peninsula, but in recent months brazen attacks have also been launched farther afield in the Nile Delta and in Cairo.

Most attacks have been claimed by Ansar Beit al-Maqdis, an Al-Qaeda-inspired group that operates from the Sinai.

On April 2, a police general was killed when three bombs exploded in front of Cairo University.

A day later the cabinet increased punishment for "terrorist" offences and expanded the scope of crimes that fall under that category.

The authorities blame the Brotherhood for the attacks and have blacklisted it as a "terrorist organisation".

Sisi is running for president and is widely expected to win the May 26-27 election riding on a wave of popularity after ousting Morsi.