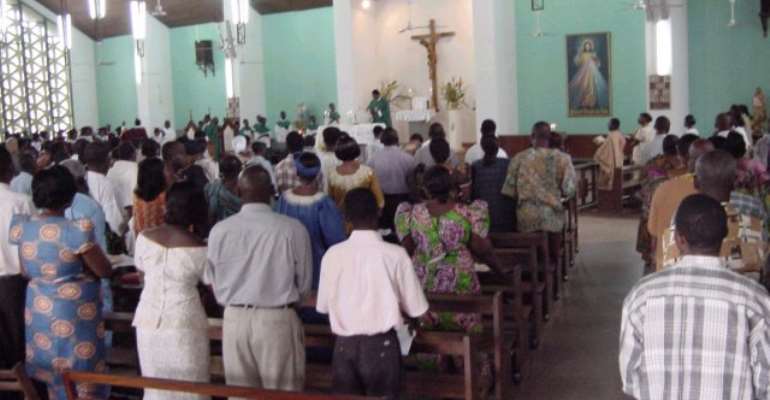 Rev Ampah said the last words of Jesus Christ on the cross, signified the need for reconciliation, accepting responsibility for wrongdoing and the promotion of peace in society, and urged all Christians to continue the ministry that Christ began.

"God has already reconciled us and we need to take it from there and continue the ministry", she declared.

Delivering the sermon, at the Varrick A.M.E Zion church, the Rev Wilberforce Wireko, appealed to Christians to speak the truth at all times, and regretted that many Christians, behave like Judas Iscariot and undermine and betray their neighbours.

At the Wesley Methodist church, the Very Reverend Albert Kweku Kittoe, the circuit minister, urged the congregation to learn a lesson from the birth of Jesus Christ, his life and death, and to be humble and tolerant. According to him, the crucifixion of Christ brought hope, salvation and victory to all mankind. He therefore called on Christians to have faith in God in whatever they do in order to achieve success.

He asked the congregation to reconcile and forgive all those who have in one way or the other offended them, as Christ did to his enemies, stressing that this would help unite the nation and move it forward. Kumasi The Very Reverend Kofi Asare-Bediako, Superintendent Minister in-charge of the Wesley Methodist Church, Kumasi, asked Ghanaians to let Christ's crucifixion serve as a constant reminder about the need to work for peace and live in harmony with one another.

He noted that the essence of the "Messiah's death" was to bring peace to the world by reconciling man with God.

The Very Rev Asare-Bediako said: "this occasion should be used to strengthen our resolve as a people to genuinely reconcile and be at peace with our Creator, neighbours, environment and ourselves".

He observed that the underlying causes of most of the conflicts in the African continent had been political and said for that matter, "as the country prepares to go to polls this year, it is important for all to remember that we are one people sharing a common destiny.

We must therefore, not allow ourselves to be torn apart and be at each other's throat just for reasons of partisan politics".

The Right Reverend Nuh Ben Abubekr, Methodist Bishop of Kumasi, called on Christians to trust God and rely on his promises.

Preaching the sermon, Pastor Paul Bedim, in-charge of Kumasi Area Northern Outreach Ministry of the Church of Pentecost, advised Ghanaians to tolerate each other's view and see themselves as one people in order to promote peace and unity in the country.

They should also surrender their lives to Christ and pray to ensure peace and stability in the country especially during the electioneering campaigns.

Pastor Bedim was speaking at a four-day convention of the Church at Adum, Kumasi on Good Friday.

The convention is being attended by members from the three northern regions. It has the theme: "Jesus said all power is given onto me". Pastor Bedim said Christ had demonstrated greater love by laying His life for the salvation of mankind.

He urged Ghanaians to reciprocate the gesture by showing love to each other to promote peace in order to deepen democracy in the country. He said Easter afforded the opportunity to everybody irrespective of his tribe, race and creed to hear the message and surrender himself to Christ.

Pastor Bedim said the Northern Outreach Ministry of the Church was an evangelical wing created to evangelise with all northerners in the Kumasi area.

He urged the people of the northern extraction to accept Christ as their personal saviour and worship Him always.

At the African Faith Ministry International at Oforikrom, Kumasi, the Reverend James Kwabena Badu, the General Overseer, said it was time ministers of religion pointed the wrongs of members of the Church despite their position or status.

He said by so doing, members would change and their attitude and build the church and also facilitate the socio-economic and religious development of the country.

He told the members of the Church to let the suffering of Jesus Christ transcend in their lives.

Rev Badu stressed that there was the need for them to tell the truth at all times no matter the circumstances.

"As we celebrate Good Friday, we must know that there is some one fighting for us and it behoves all of us to come together as one group of people with a common destiny and lead good moral lives worthy of emulation", he said. Ho At the Ho Bankoe Elorm Parish of the E.P. Church, Mrs Esther Adu-Yao, Catechist, urged Christians to let the spirit of forgiveness demonstrated by Jesus Christ towards those who masterminded, mocked and carried out his crucifixion be a symbol of their lives.

She said though an annual Christian ritual every Easter provides new lessons and dimensions about true Christian life through introspection. Mrs Adu-Yao said every true Christian must be ready to say sorry when he or she offends the other person and also accept without reservations, apologies from others for wrongs done to them.

She said unless Christians were ready to emulate this lesson of the cross, they would be constantly "crucifying" Jesus Christ who has laid the foundation for forgiveness for all humanity. Aflao At Aflao, Bishop Thomas Lekeh, founder and leader of the Holy Ghost temple Church at exhorted Christians to lead lives which are in conformity with the examples of Jesus Christ.

Bishop Lekeh said unless Christians reflect the life of Jesus Christ practically to the rest of the world the significance of his death and resurrection would be lost on the world.

He therefore urged Christians to change their lives for the better in order to attract the blessings of God and Jesus Christ.

The Reverend Fitzgerald Odonkor, Head Pastor of Harvest Chapel International the Church, advised politicians, media practitioners and the general public to champion the crusade of reconciliation, sacrifices and truthfulness as the nation prepares for Elections in 2004.

He said, "The growth and development of every country depends largely on the principles and virtues of patriotism, tolerance and sense of nationhood which are vital pillars for a peaceful, transparent and credible elections." He therefore, urged religious leaders, politicians and journalists to be let Jesus Christ's ultimate sacrifices on the cross to save mankind, guide their actions, campaign messages and reportage. Rev. Odonkor who was speaking to the Ghana News Agency (GNA) after the Good Friday Service reminded Ghanaians that "Ghana is our only country; its preservation must override any parochial, individual and political interest".

The service focused mainly on the reading of the Seven Sayings of Christ on the cross, which was solemnly inter-spread with hymns, praises and worship songs.

Rev. Odonkor said the message of Good Friday must stir the church, politicians and journalists to up-hold and champion principles in all sphere of life to enhance the living standards of the Ghanaians. He said truth would always stand and prevail over falsehood, beyond all schemes, strategies, and propaganda, adding that in all their rallies, they must recognise God as Supreme. Rev. Odonkor said Good Friday serves as a constant reminder of the ultimate sacrifices of God for total and unconditional reconciliation. He therefore, called for emulation of virtues, and unconditional sacrifices through the provision of comfort, money, material, time, and resources to enhance the conditions of others. Rev. Odonkor urged Church leaders to inculcate in their members their civic responsibilities to their families, communities and nation. Preaching the sermon, Rev. Kwesi Dickson a Senior Pastor of the Church reminded Christians of the power of the crucifixion to liberate, cleanse and have authority over sin. Rev. Dickson said Christ's death signified the direct assess to the kingdom of God. Accra At the Calvary Methodist Church at Adabraka, Accra, the Rev Prof Kwesi Abotsia Dickson, Superintendent Minister of the Methodist Church, called on mankind to give out themselves to God.

Preaching the sermon, he said the death of Christ was a prophetic declaration of his suffering in order to redeem mankind from sin. Reverend Prof Dickson stressed the need for all to sacrifice and be prepared to give of themselves, not only to their families, but their communities, the nation and for humanity as a whole.

He said everybody has a contribution to make to the development of his environment no matter his status.

He said like Jesus, one needed not to be prominent before he could make sacrifices to each other.

"Nobody should say I'm worthless," he said.

As part of the sacrifice, Rev Prof Dickson said those suffering from AIDS should not be shunned.

Rather they must be shown love and care as experience, from his interactions with some of them showed that they felt their burden lessened when they are shown love.

Rev Prof Dickson said the death of Jesus was not a disaster. "It was a victory over evil, and the resurrection of Christ is a continuation of good works of God".

He urged the congregation to be guided by truth for national progress. At the Valley of Grace International Ministry at Mamprobi, Reverend Ivy Tetteh, the General Overseer urged Christians to pray unceasingly for the December elections so that the current peace in the country was not sacrificed for any political reason.

She said Christians must recognize that the sustainability of peace was their responsibility adding, " That is why we have been made watchtower of the nation to guard and keep it safe, as well as shape its future". Reverend Ivy was preaching on the theme " Achieving Greater Height through his blood and the power of his Resurrection". The Church observed the death of Christ in a manner of taking sober reflection of the agonies Christ went through on the cross, she said. She was optimistic that the coming years would usher the country into an era of great economic prosperity.

"Just as the death of Christ has liberated man, in the same way it will free the country of its present predicament and pave way for economic progress".

Reverend Ivy urged the church to ensure that their lives did not impact negatively on the society.

" Let us be mindful of our deeds so that we do not make the death of Christ meaningless", she added.

She called particularly on the youth to eschew evil practices since they had the tendency of destroying their lives.