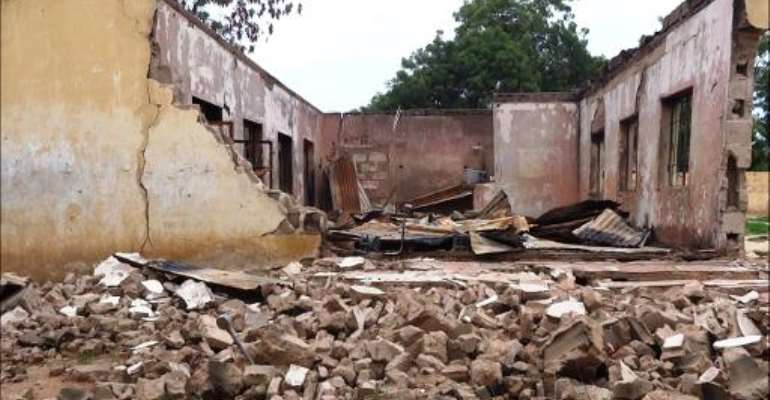 This picture taken on August 6, 2013 shows a blown up students hostel in the Government Secondary School of Mamudo, in the northeastern Nigerian Yobe state, after an attack by Boko Haram gunmen. By Aminu Abubakar (AFP/File)

The raid at 2:00 am (0100 GMT) targeted the Federal Government College in the town of Buni Yadi in Yobe state and bore the hallmarks of a similar attack last September in which 40 died.

The attackers reportedly hurled explosives into student residential buildings, sprayed gunfire into rooms and hacked a number students to death.

A senior medical source at the Sani Abacha Specialist Hospital in Yobe's capital Damaturu said the gunmen only targeted male students and that female students were "spared".

"So far, 43 bodies have been brought (from the college) and are lying at the morgue," said the source, who requested anonymity as he was not authorised to discuss death tolls.

Yobe has been one of the hardest areas in Boko Haram's four-and-half year Islamist uprising, which has killed thousands of people.

The group has been blamed for waves of school attacks, especially in Yobe, where scores of students have been slaughtered in the last year.

The state's police chief, Sanusi Rufai, who confirmed the attack and had given an earlier death toll of 29, was headed to Buni Yadi, roughly 60 kilometres (40 miles) from Damaturu, with Governor Ibrahim Geidam to assess the damage.

"They had tree branches on them which is a sign used here to signify a corpse is in a vehicle," he said.

People whose relatives were studying at the college had surrounded the morgue and were desperately seeking information about those killed, forcing the military to take control of the building to restore calm, the hospital source said.

Yobe is one of three northeastern states which was placed under emergency rule in May last year when the military launched a massive operation to crush the Boko Haram uprising.

At least 40 students were killed in September at an agriculture training college in Yobe after Boko Haram gunmen stormed a series of dorms in the middle of the night and sprayed gunfire on sleeping students.

More than 1,000 people have been killed in the northeast since the emergency measures were imposed, despite the enhanced military presence.

Boko Haram, declared a terrorist organisation by Nigeria and the United States, has said it is fighting to create an Islamic state in Nigeria's mainly Muslim north.

Geidam and the governor of neighbouring Borno state, Kashim Shettima, have fiercely criticised the military's record in combatting Boko Haram, insisting that more resources were needed to defeat the emboldened and increasingly well-armed insurgents.

In a video sent to AFP last week, Boko Haram's purported leader, Abubakar Shekau, said he would continue his relentless campaign of violence on anyone who supports democracy or so-called Western values.

Shekau, deemed a global terrorist by the United States, also threatened to widen the insurgency outside the group's northeastern stronghold with attacks in the oil-producing, southern Niger Delta region.

Nigeria is Africa's top oil producer and an Islamist attack in the country's key economic region would pile further pressure on President Goodluck Jonathan, who has faced scathing criticism over his handling of the Boko Haram crisis.

Jonathan on Monday defended his government's record in tackling the militants, telling reporters that "no effort will be spared" to protect civilians and their property.

He renewed his call to Boko Haram to lay down their arms and engage in talks to address their grievances.