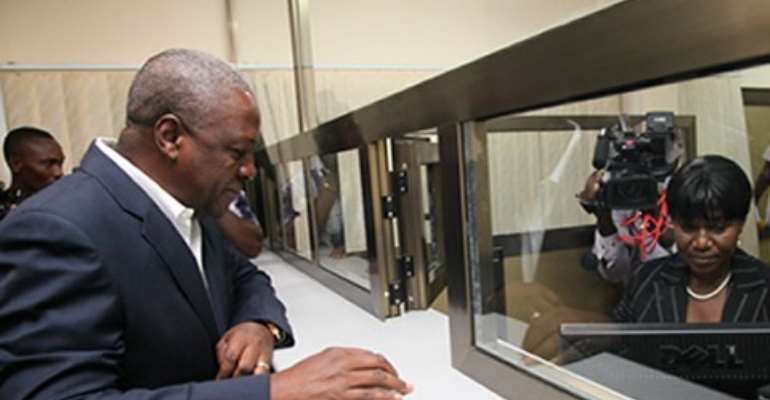 The Ghana government collects taxes from only two out of the six million eligible taxpayers, a tax expert, Dr Edward Larbi Siaw has revealed, adding that “we cannot con­tinue to deal with a population of 25 million and collect taxes from only two million.”

The need to address this gap in our revenue collection drive has become ex­tremely urgent as Ghana can no longer borrow under concessional rates and for long periods, he said, explaining that this is because of Ghana's “present rating as a lower middle income economy, which has also led to a reduction in the avail­ability of grants and aid.”

Dr Larbi Siaw, a Tax Policy Advisor to Ghana's Ministry of Finance and Eco­nomic Planning, said this while deliver­ing a keynote speech at the opening of a five-day International Conference on Fiscal Justice last week.

“The country cannot continue to in­crease tax rates for those in the tax net and leave out others,” he said, adding that national tax policies and revenue performances have direct impact on the overall budget deficit.

Dr Siaw told participants at the con­ference the Ministry of Finance wecomes  suggestions, workable strategies and recommendations proposed by the conference to help improve the tax sys­tem in the country.

Earlier, the Deputy Campaign Direc­tor of OXFAM International, Mr Stephen Hale, said while taxation was the most sustainable source of financing development, “there was still a substan­tial lack of capacity and insight of civil society into the technical-fiscal domain of a country's tax system.”

He said the conference - which was organised by OXFAM Ghana, in collab­oration with the International Tax Com­pact and Tax Justice Network-Africa, all non-governmental organisations - was therefore expected to make recommen­dations on the need to engage develop­ing countries and Civil Society Organisations (CSOs) in the effort to re­form international tax systems.

Representatives from international organisations, CSOs and government from about 15 African and Asian coun­tries participated in the conference.

Mr Hale maintained that to achieve greater accountability, civil society must be well positioned through avenues such as public forums for discussions to pro­mote fair and pro-poor tax systems, rein­force public scrutiny of tax governance, and promote a national dialogue on the desirability of more progressive taxation.

Tax revenues in developing countries fall short of what realistically could be obtained when analysing their actual po­tential and capacity, both in terms of ef­ficiency and progressiveness, he said, “tax policies in developing countries were oriented towards collecting taxes easily, including consumption and wage taxes which impose a higher tax burden on poorer households and formal sector employees.”

According to Mr Hale, on the aver­age, 18% of Gross Domestic Product (GDP) comes from tax revenues in African countries, compared to an aver­age of 38% in Western European coun­tries.

Although the world had created so much wealth which could resolve edu­cational and health-related issues, such resources were concentrated in the hands of the top 1 % rich people, he said.

“A recent OXFAM paper has re­vealed that the top 85 people in the world control as much as the earnings of 1.5 billion people,” he said.

Mr Hale further explained that OXFAM's recent research revealed that improving taxation could potentially raise $269 billion annually, which could be sufficient to cover 60% of the financ­ing requirements for achieving the Mil­lennium Development Goals.