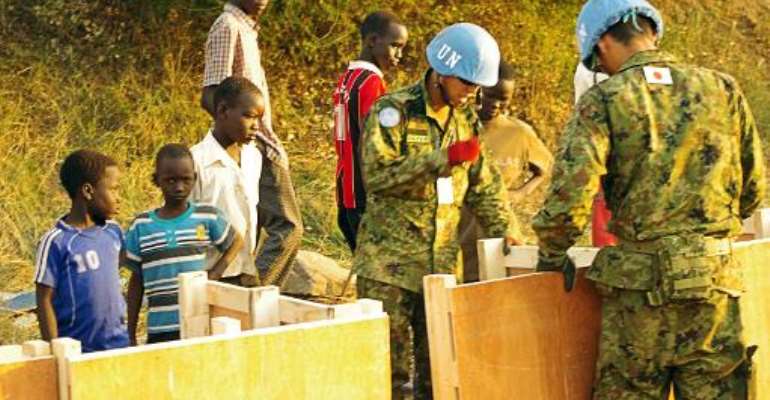 A handout photo received on December 19, 2013 from UNMISS shows officers building latrines for civilians seeking refuge in the UNMISS compound on the outskirts of Juba on December 17, 2013. By UN Military (UNMISS/AFP)

Juba (AFP) - The United Nations said Thursday it had lost contact with one of its bases in South Sudan as continued fighting between rebels and government forces increased fears the world's youngest state was sliding towards civil war.

The UN said it has lost contact with a base stormed by attackers and at least three peacekeepers and civilian staff are unaccounted for.

UN deputy spokesman Farhan Haq said 40 Indian peacekeepers at the base at Akobo in Jonglei state had been moved to a nearby South Sudan army camp, but that three peacekeepers and possibly one civilian worker were missing.

The fate of more than 30 ethnic Dinka civilians who had taken refuge at the Akobo base was also not known, Haq added.

"We are no longer in contact with the Akobo base," Haq said.

President Salva Kiir has blamed the bloodshed on a coup bid by his perennial rival Machar, who says the alleged overthrow was a fabrication to cover up a regime purge.

Kiir has said he was ready to "sit down" but Machar, who was sacked by the president in July, rejected the offer.

In an interview with RFI radio Thursday, Machar said he had appealed to the ruling party and army "to remove Salva Kiir from the leadership of the country".

Some 450 people have been killed in the capital Juba since battles broke out on Sunday, including around 100 soldiers, Aguer said.

The battles have raised concerns of ethnic conflict, with Kiir coming from the majority Dinka people and Machar from the Nuer.

UN human rights chief Navi Pillay has also expressed deep concern over reports of "numerous extra-judicial killings" and "civilians killed in Juba based on their ethnicity".

Human Rights Watch said witnesses had reported horrific cases of both soldiers and rebels executing people based on their tribe, warning of "revenge attacks".

However, the government insists the clashes are over power and politics, noting that both sides include leaders from different tribes.

"We condemn in strongest possible terms attempts to depict (the) coup as ethnic strife," a government statement Thursday read, noting that of the 11 key figures arrested since fighting began -- many former powerful minsters -- only two were Nuer.

'On the cusp of a civil war'

The United Nations peacekeeping mission said it was sheltering civilians in six state capitals, including Juba and Bor, as well as in Bentiu, the main town of the crucial petroleum-producing state of Unity.

At least five oil workers were killed in Unity when attackers broke into their compound late on Wednesday, a company official said.

Foreigners were being evacuated from the troubled country, with the United States and Britain sending in flights for their citizens, and others fleeing overland south to Uganda.

Long lines of aid workers and expatriates began crowding Juba's airport on Wednesday waiting to board the first flight they could out of the country, with delays after an aircraft that crash landed -- with no casualties -- blocked the runway for several hours.

"There is a risk of this violence spreading to other states, and we have already seen some signs of this," Ban said, adding the crisis "urgently needs to be dealt with through political dialogue".

There were fears that the poor and unstable nation, which broke free from Sudan in 2011, could slide into all-out conflict.

"The scenario many feared but dared not contemplate looks frighteningly possible: South Sudan, the world's newest state, is now arguably on the cusp of a civil war," the International Crisis Group (ICG) think tank warned.

Kenya's Foreign Minister Amina Mohammed told AFP she was working with diplomats from Djibouti, Ethiopia and Uganda, calling the crisis a "regional issue."

All are members of a regional body, the Inter-Governmental Authority on Development (IGAD), whose members played key roles in pushing forward the 2005 deal that ended Sudan's two-decades long civil war with the south.

The capture of Bor raises ugly ghosts from South Sudan's past.

The town, which lies some 200 kilometres (125 miles) north of Juba, is the capital of the state of Jonglei, one of the most volatile regions in the young nation.

Machar, who fought on both sides during Sudan's 1983-2005 civil war, has been accused of leading a brutal massacre in Bor in 1991.