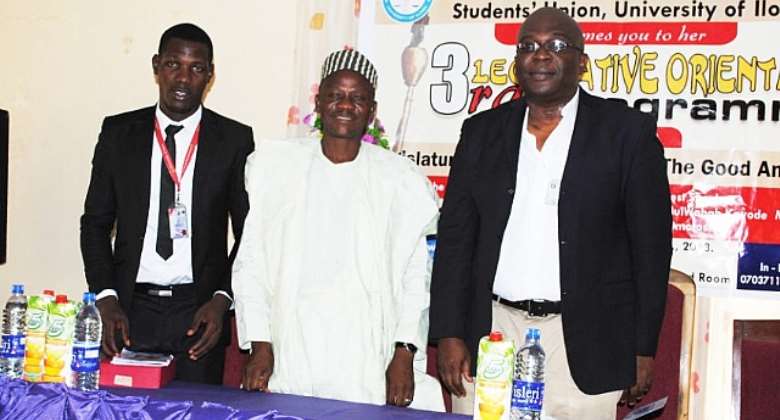 In what has been described by many students of the University of Ilorin as a right step in the right direction, the Students' Representative Council (SRC, the Legislative Arm of the Students' Union) has once again staged her legislative orientation programme for the new members representing their respective faculties at the students' union level.

The 2013 edition of the programme is the third in the series. The programme which was staged last month was attended by officials of the Student Affairs Unit of the University; the Dean, Prof. Abayomi Omotesho, the Sub-dean, Dr. A. Yusuf and the Deputy Registrar of the unit, Mrs. K.W. Salle.

In his 30 minutes lecture, the Guest Lecturer, Hon. Abdulwahab Omotoshe, a former majority leader of the Kwara State Assembly described the legislature as the face of democracy. According to him, the legislature is usually the first arm of government to be removed by any military regime upon toppling the government. The Co-lecturer, Mr. Adeniyi Abass, a former Speaker of the Students' Representative Council of the University admonished the SRC members on the standing rules and bye laws of the house. He urged them to be tolerant with other members while deliberating on issues at the floor of the house.

The drive for a legislative orientation programme for honourable members is to enhance the knowledge of the members and promote the aim of the Union as a learning ground and a place for the leaders of tomorrow to imbibe the culture of leadership excellence. This will culminate into the entrenchment of modern day legislative practice in Students' unionism.

The Speaker of the SRC, Rt. Hon. Kabir Alawaye expressed gratitude to the university management for their unflinching support since the inauguration of the council last June. He further highlighted three point agenda of the council for the 2013/2014 Academic session. They include; the Constituency outreach; Law-reform; and the oversights.

The programme was well attended by members of the legislative arm, the representatives of halls of residence and congressmen.