A Poisoned Chalice In Each Of His Hands 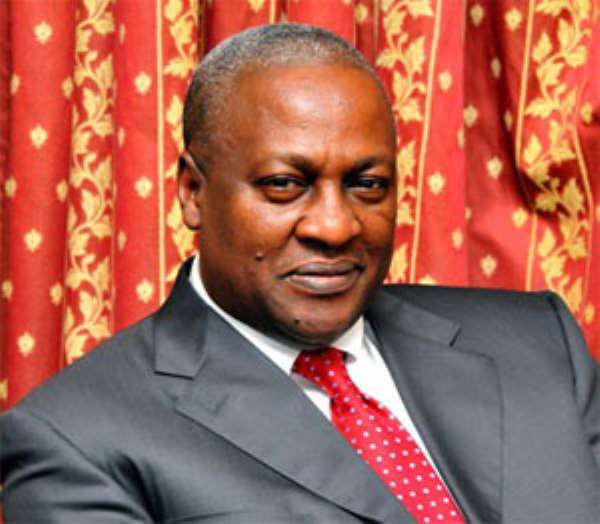 President John Dramani Mahama
President John Dramani Mahama has told Ghanaians that he is the unluckiest President, simply because he is being bashed day in and day out. I sincerely share his sentiments, but he deserves it.  He threw a ball against the wall and the law of Karma is working perfectly to his disadvantage.  If he is to die and come back again and finds himself in a lesser position, he will learn how to not criticize and insult people in higher position.  When he was the Vice President of this country, we heard him on many occasions using words like, 'foolish', 'baloney' and 'stupid' to describe people who disagreed with his government's policies.

John Mahama has in his right hand a chalice full of poisonous corruption and in the left hand, another chalice full of poisonous maladministration.  He is begging Ghanaians to be patient with him but he was not patient with Mr John Agyekum Kufuor.  In fact, in those days when Kufuor was in power, John Mahama joined demonstrations organized by prickly Kwesi Pratt and his gang of deceivers called Committee for Joint Action. When the Volta River nearly dried up which led to 'dumso dumso', Mr. Mahama took the government of Kufuor to the cleaners even though he knew very well that it was a natural disaster.  Today, the Volta River is overflowing its banks with an additional dam built by the Kufuor administration at Bui, but still we have 'dumso dumso' and he says we should have patience.  Where patience means what?

Nothing seems to be working in this country as we trudge on in pain, looking for our daily bread.  In the run-up to the 2012 elections when Nana Akufo-Addo strutted the land shouting free SHS, John Mahama and his propagandists were shouting quality education from the rooftop.  Today, even chalk is in short supply in schools and teachers have to compel children to come to school with chalks.  Apart from the fact that we are not getting the quality education that John Mahama promised, some children are not getting education at all because of the high costs of school fees.

I know a man who used to shout from the rooftop that it was parents who were irresponsible who shouted the free SHS slogan.  This year, two of his children passed the BECE so well that the computer picked them to go to Mfantsipim SHS in Cape Coast, but because of the school fees the boys are sitting at home. One day when I met him and asked why the boys were still at home, this was what he told me:  'I have done the greatest mistake in my life and I am paying dearly for it.  If I had voted for Nana, this situation will not have come my way.  Tomorrow is another day'.

The agriculture sector is gradually dying. They talk of food buffer zone but the truth is that nothing has been stored for the rainy day.  Silos built by Dr. Kwame Nkrumah to store maize are lying empty at maize producing areas like Nkoranza, Techiman, Kintampo, Wenchi, Atebubu etc.  The fertilizer subsidy which was introduced by the Kufuor administration has gone with the wind, while farmers find it extremely difficult to buy fertilizers.  When I listened to speeches delivered by government officials during this year's Farmers Day celebrations, I felt like hitting my head against a wall.  Many speakers did not understand what they were telling the people.  They sit in Accra and lie through their teeth because they don't visit the villages where subsistence old farmers struggle to keep their heads above water.

The gospel truth is that farming is not attractive to the teaming youth of today.  If you go to the Brong Ahafo Region in particular, young men and women damn the risk of crossing the Sahara desert and travel to Libya to seek for greener pastures.  While some of them are devoured by strange beasts when they go searching for water in the desert, many of them who try to cross the Mediterranean Sea to reach Lampadusa on their way to Italy are devoured by the sea on daily basis.  To get to Libya, one needs not less than GHC1000 and to cultivate a ten acre maize farm, one will need not less than the same amount, but the young men and women prefer to use the amount to try their luck in Libya. It tells you how desperate they are and how they view farming.

The other day when ex-president Rawlings went haywire and said the Kufuor administration monopolized corruption when he (Kufuor) was in power, I wondered whether the man has been living in Mars since Mill/Mahama and now Mahama/Amissah-Arthur took over power. Indeed, I wondered whether Mr. Rawlings has all too soon forgotten what he did to perceived corrupt Ghanaians when he was in power during the AFRC/PNDC days.  Unless Mr. Rawlings is trying to play mischief, he should have known that since we got our independence, no government has been more corrupt than this regime headed by John Dramani Mahama.  The scary pillage of state resources plus the 'Create, Loot and Share' craze are very clear to every Ghanaian.

I always give Rawlings the credit for the way he fought corruption but his was a military regime where the guns ruled supreme.  Kufuor's administration did put certain effective mechanism in place to check corruption and these mechanisms went a long way to minimize corruption in Ghana.  In fact, even though the mechanisms put in place are still there, John Mahama has politicized them to the extent that they have all become virtually ineffective.  That is why today in Ghana we have an unusual phenomenon in the history of graft, corruption and naked thievery of state resources by a very few individual government appointees.

For now we are experiencing subdued grumbling among the citizenry about what appears to be a state sanctioned thievery.  As for how long this subdued grumbling will continue without any upheaval is a matter for you and I to guess.

Public mistrust of government is growing day by day but sadly, the President seems to be living in a walled city where the noise of the trumpets outside the wall is not heard by those who live in the city with the President.  And when the walls of Jericho do come tumbling down, only God knows what the results will be for those living in the walled city.  You see, when people reach the end of human endurance, they fight back violently.  President Mahama and his NDC looters should not take the relative peace that we are enjoying for granted.  The other time the trap caught John Mahama's legs and so he was able to release himself with his hands. What will he do if the trap catches his hands?  Ah, maybe he will release himself with his teeth. Now that the pendulum is swinging right, Mahama and his family and friends as well as NDC bigwigs can continue to loot the state coffers but what if the pendulum starts to swing left?  Good morning Alhaji Gomda of DAILY GUIDE.  Greetings from your grandfather, the zongo boy who fears no police!!!