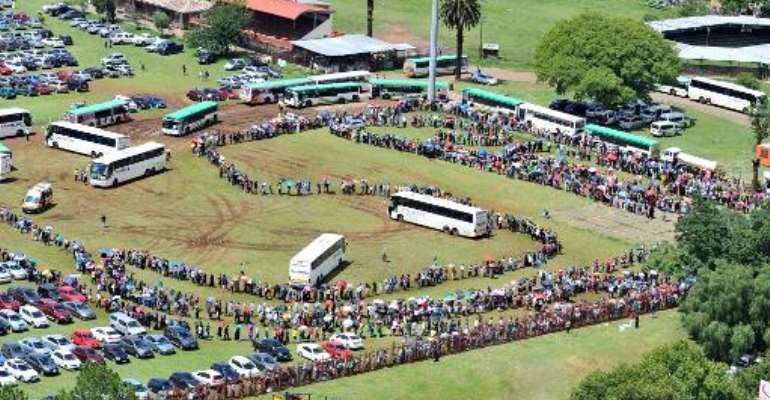 Pretoria (AFP) - Nelson Mandela was reclaimed by ordinary South Africans who queued in huge numbers in the hot sun Thursday to file past his open casket on a day reserved for the public.

As Mandela lay in state for a second day, a row deepened over a sign language interpreter at his memorial service, who responded to charges he was a fraud by insisting that a schizophrenic episode had caused him to gesticulate nonsensically.

Thursday's viewing was devoid of the world leaders, VIPs and celebrity mourners who had monopolised much of the previous day.

Instead it was just tens of thousands of ordinary people from all walks of life who queued from before daybreak for a last glimpse of the prisoner-turned-president renowned for his uncommon common touch.

The long lines were reminiscent of the snaking queues of voters who waited to cast their first ballots in a democratic South Africa in 1994.

They were often dressed in the vibrant yellow, green and black of the ruling African National Congress that Mandela once led, and many wore black armbands -- singing and dancing as helicopters hovered overhead.

The large numbers meant many were inevitably turned away, leaving a last chance on Friday before Mandela's body is removed and taken to his boyhood home of Qunu for eventual burial on Sunday.

The response to the public viewings has been enormous, reflecting a profound desire among many to say a personal farewell to the man who led them out of the apartheid era.

Up to 14,000 people had filed past the open-top casket on Wednesday afternoon alone.

"I can't even sleep, I'm thinking of Madiba," said Anita Bodiba, 35, using the clan name for the democracy icon, who died a week ago at the age of 95.

"He is the one who united us here in South Africa -- white people, black people, Indian people," she said.

Two hours before the viewing ended, officials were forced to shut the gates on new arrivals.

The sharp media focus on Mandela's week-long state funeral was fractured slightly by the issue of the sign interpreter for the deaf who had worked Tuesday's memorial service.

Thamsanqa Jantjie was branded a fraud by members of South Africa's deaf community, who said his signing for US President Barack Obama and other world leaders at the event in Soweto amounted to little more than "flapping his arms around."

Jantjie on Thursday insisted he was a qualified signer, but said his behaviour was down to a sudden attack of schizophrenia, for which he takes medication.

"There was nothing I could do. I was alone in a very dangerous situation," he told Johannesburg daily The Star, adding that he was hearing voices and hallucinating at the time.

There was further public anger over an image circulating on the internet which purported to be of Mandela's face after his death.

The photo was believed to be a hoax, given its strong resemblance to an AFP photo taken of Mandela in July 1991 when he was closing his eyes at an ANC party congress in Durban.

Mandela's lying in state was held in the amphitheatre of the Union Buildings where the Nobel laureate was inaugurated as South Africa's first black president in 1994, after emerging from 27 years' imprisonment.

"It was so sad," Alinah Lekalakala, 52, said after seeing the body.

"I needed to pay my last respects because I am so grateful for what he has done," Lekalakala said.

"This will help me to accept that he is gone."

In the amphitheatre soon to be renamed after him, Mandela's body lay underneath a perspex screen, dressed in the type of printed shirt that became his trademark.

Some grief-stricken visitors collapsed as they passed the casket, and were helped away by medical personnel and fellow mourners.

But for Tryphina Kau, 78, the event was a joyful one.

"I am very, very happy because his spirit is still with us, only the body is going," she said, recounting the day Mandela shook her hand while she queued to vote in South Africa's first democratic elections in 1994.

Last Sunday had been a day of national prayer, and on Tuesday tens of thousands of people braved persistent rain to attend the memorial in Soweto's Soccer City stadium that was addressed by US president Barack Obama and UN chief Ban Ki-moon.

A world away, in Hollywood's Beverly Hills, there was special applause Thursday as the biopic "Mandela: Long Walk To Freedom," received a best actor nomination.