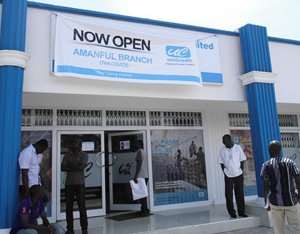 According to him, the long-term objective of the company is to help customers to improve their lives through wealth creation.

Mr. Ameyaw stated this at the opening of the 10 th branch of uniCredit Ghana Limited located at Amanful, a suburb of Takoradi.

UniCredit, formerly Kantamanto Savings and Loans Company Limited, was licensed by the Bank of Ghana (BoG) in 1995 to operate as a non-bank financial institution under the Financial Institution (Non-Banking ) Law, 1993 (PNDC L 328).

He noted that the company had recorded significant improvement in its operations over the past five years.

He said the financial institution exceeded its minimum statutory capital requirement for savings and loans companies which helped it to withstand unanticipated losses.