Stella Oduah Should Resign Now or Be Suspended Pending Investigation 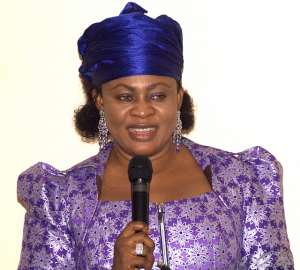 Transform Nigeria Citizens Initiative (aka Transform Nigeria Movement) an international organization whose vision is to develop that critical mass of citizens who are not only aware of their civic rights but also understand the need to fight for such rights and demand accountability from the rulership observes with dismay the melodrama currently playing out in the country, where an appointed Minister of Aviation, Ms Stella Oduah is accused of purchasing two BMW Armored cars at the inflated price of N255 million. This is in a country where the population lives on less than $1 a day.

The whole drama gets more alarming, worrying, and shameful as proceedings at Senate Committee on Aviation which is probing the crisis in the Aviation industry reveals Ms Oduah may have also approved the procurement of additional two Lexus Limousine cars and two Toyota Prado jeeps.

We reject and will oppose in its totality any attempt by the presidency or the National Assembly to shield her from prosecution as the country's anti-corruption agencies ought to have swung into action against her immediately if the current administration truly abhors corruption. Ms Oduah ought to have been suspended with immediate effect to allow for proper and unbiased investigation to be carried out.

We also frown at the ethnic dimension, comments and street actions that the issue has taken, cautioning those we describe as tribal lords and lynch mobs on the two divides that such biased sentiments would hardly achieve an objective basis for establishing the culpability of the public officers involved in the matter. Corruption has no colour, no ethnicity, and no tribe.

We therefore use this opportunity to urge the entire citizenry, especially the youths to rise against corruption in all its ramifications. The problems we face as a people are not based on our ethnicity or tribes. We might be Yoruba, Igbo, Hausa, Ijaw, Urhobo, Efik or Fulani or any other, but the problems we face are not because of our ethnicity; they are because of the failure to arise, face them and change them. They exist because we have failed to confront them and fight them!

The youths of this country have been raised to see each other along these ethnic lines, divide ourselves along these paths and hate each other for it while the older generation collectively loot our commonwealth. The older generations have dragged us down this path of perdition and our youth gets entangled in the endless and fruitless debates about tribes and ethnicity.

We at Transform Nigeria Movement join millions of Nigeria to call for the resignation of Ms Stella Oduah from her exalted position. As the pressure continues to mount on Oduah, we urge her to throw in the towel and apologise to Nigerians, while the full weight of the law is carried out to the letter. As the minister in charge of NCAA, the agency that procured the controversial armoured vehicle, the buck stops at her table.

Justice is blind; If Prof. Barth Nnaji despite his achievement in the power sector could be kicked out because of conflict of interest, we see no reason why the Aviation Minister should still be on her seat, supervising the ministry, while investigations that may lead to revelation of more corrupt practices carried out under her and her cohorts are going on.

We refuse to be dragged into ethnic sentiment on this monumental corruption and call on all Nigerians to resist any attempt by tribal warriors to brainwash them into thinking that Oduah is being witch-hunted. Why do we fall into the trap of fighting each other daily rather than rallying around for a common cause?

Let the law take its course, there should be no soft landing for anyone found culpable of this miasmic corruption. Any pardon granted to impunity is a license granted, that any appointed or elected government official can commit any crime and go scot free. While we at Transform Nigeria Movement understand the place of mercy and forgiveness, we refuse to be drawn to a cause that will jeopardize Nigeria in the name of mercy. We call on the President to act and prove his mettle for once. There was no mercy when this fraud was perpetrated! We also call on the government to deal ruthlessly with any official in the various agencies found culpable.

Ms Oduah's continuous stay in the President Goodluck Jonathan administration is already a big stain and embarrassment to the country. While the president may have taken enough darts for his appointees, this one of Oduah is one that will sink him into political oblivion should he decide to associate with her if found culpable.

We at Transform Nigeria Movement agree that Oduah is not the most corrupt Nigerian, but the process of cleansing the Augean stable has to start from somewhere, and if it begins with her, so be it. Let the change start now! This is our time to end this madness!

The taxpayers who pay her salary have overwhelmingly called for Oduah's resignation and we at TNM lend our voice to this call that the Minister should resign with immediate effect. The voice of the people is the voice of God and now the people have spoken.