Taxi Drivers’ Writ Against A.M.A Lacks Jurisdiction And Must Be Thrown Out! 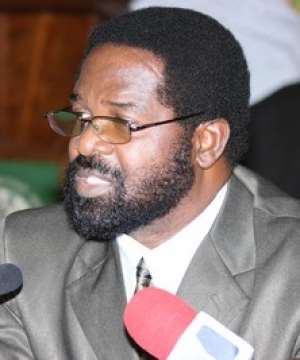 It has come to the attention of Sonetco Institute [SI], that more than 10,000 taxi drivers plying their trade in Accra under the umbrella of the “Committed Floating Taxi Drivers Association”, have filed a writ of summons at the High Court, Accra; against the Accra Metropolitan Assembly (A.M.A), the Attorney-General [AG], the Ministry of Transport, the Minister of Transport, Madam Dzifa Aku Ativor, and the Inspector General of Police [IGP], Mr Mohammed Ahmed Alhassan.

The Plaintiffs' (taxi drivers) latest move after series of “unauthorized” demonstrations was pursuant to the AMA's recent directive through its Chief Executive, Dr. Alfred Oko Vanderpuije, that all commercial vehicle drivers in the Country, must be employed by or belonged to a recognised commercial road transport organisation; under and by virtue of Regulation 121, subsections [1] and [2] of Legislative Instrument

According to media reports, some of the reliefs sought by the Plaintiffs, Committed Floating Taxi Drivers Association, includes, “a declaration that upon a true and proper interpretation of Article 1 (2), 21 (1) (d), (e) (g) and 21 (2) of the 1992 Constitution, the enforcement of the said Legislative Instrument (LI) 2180 (2012), Regulation 121 subsections (1) and (2) of LI 2180 (2012) is inconsistent with, or in contravention of the said provisions of the constitution and is, therefore, unconstitutional, void and of no legal effect”; and “a perpetual injunction to restrain Dr. Alfred Oko Vanderpuije, and the AMA itself, from enforcing the said bye-laws on commercial transport operations”.

Though we at SI, strongly commends the over 10,000 taxi drivers for boldly taken stepsby channelling their grievances through the Court to bring a lasting solution to thisrevenant problem; and also entrenching our democracy; we find it very appalling to understand, what actually informed Ms. Mary Ohenewaa Afful, the lawyer for the Plaintiffs (taxi drivers) to file the said writ at the High Court, seeking a relief under Article 1(2) of the 1992 Constitution; i.e. "A declaration that upon a true and proper interpretation of Article 1 (2), 21 (1) (d), (e) (g) and 21 (2) of the 1992 Constitution, the enforcement of the said Legislative Instrument (LI) 2180 [2012], Regulation 121 subsections (1) and (2) of LI 2180 (2012) is inconsistent with, or in contravention of the said provisions of the constitution and is, therefore, unconstitutional, void and of no legal effect."; WITHOUT cautioning/admonishing herself and/or adhering to the terms of Article 2[1] & [2] of the Constitution, which states:

"(1) A person who alleges that -
(a) an enactment or anything contained in or done under the authority of that or any otherenactment; or

(b) any act or omission of any person;
is inconsistent with, or is in contravention of a provision of this Constitution, may bring an action in the Supreme Court for a declaration to that effect.

(2) The Supreme Court shall, for the purposes of a declaration under clause [1] of this article, make such orders and give such directions as it may consider appropriate for giving effect, or enabling effect to be given, to the declaration so made.",

SI even finds it more alarming to understand, why the Plaintiffs' Solicitor totally ignored the provisions under Sections 2, 3 and 15 of the Courts Act, 1993 [Act 459], which clearly spell out the jurisdictions of the Supreme Court and the High Court; before seeking an Article 1[2] relief at the High Court.

“Section 2-General Jurisdiction of Supreme Court:
(1) The Supreme Court shall be the final court of appeal and shall have such appellate and other jurisdiction as may be conferred on it by the Constitution or by any other law.

(2) The Supreme Court shall not be bound to follow the decisions of any other court.

(4) For the purposes of hearing and determining a matter within its jurisdiction and the amendment, execution or the enforcement of a judgment or order made on any matter, and for the purposes of any other authority, expressly or by necessary implication given to the Supreme Court by the Constitution or any other law, the Supreme Court shall have all the powers, authority and jurisdiction vested in any court established by the Constitution or any other law.

(5) The determination of any question before the Supreme Court shall be in accordance with the opinion of the majority of the members hearing the case.”

(a) all matters relating to the enforcement or interpretation of the Constitution; and

(b) all matters arising as to whether an enactment was made in excess of the powers conferred on Parliament or any other authority or person by law or under the Constitution.

“Section 15-Jurisdiction of High Court
(1) Subject to the provisions of the Constitution, the High Court shall have—

(c) appellate jurisdiction in any judgment of a District Court or Juvenile Court;

(d) jurisdiction to enforce the Fundamental Human Rights and Freedoms guaranteed by the Constitution; and

(e) any other jurisdiction conferred by the Constitution, this Act or any other enactment.[As substituted by the Courts (Amendment) Act, 2002 (Act 620), s.2]

(1a) For the purposes of paragraph (c) of subsection (1), an order requiring a person to enter into a recognisance is a sentence. [As inserted by Courts (Amendment) Act, 2004 (Act 674) para. (b)] (3) The High Court shall have no power, in a trial for the offence of high treason or treason, to convict any person for an offence other than high treason or treason.

(4) A Justice of the High Court may, in accordance with rules of court, exercise in court or in chambers, all or any of the jurisdiction vested in the High Court by the Constitution, this Act or any other law.”

By the terms of this submission, SI verily believe that, the proper forum to deal with thisrecurring issue once and for all, is the Supreme Court; as enshrined under Article 2[1] & [2] of the Constitution; and not the High Court, as the Plaintiffs per their Counsel, have sought and done.

Because the matter is of public interest, SI is of the view that, there is a great need to deal with it expeditiously at the right forum; without any delay occasioned as a result of technicalities.

It is our hope and believe the Attorney General's Department, will take notice of thisgratuitous blunder on behalf of the Plaintiffs to come under Order 9 rule 7 & 8 of the High Court Civil Procedure Rules, 2004 [CI.47], to set aside the Plaintiffs' writ for want of jurisdiction, with punitive costs [if any]; to enable the Plaintiffs to put their house in order, to appear before the Supreme Court, which is clothed with the requisite jurisdiction and capacity to hear and determine issues relating to Article 1[2].