US capture of Al-Qaeda operative 'appropriate and legal': Kerry 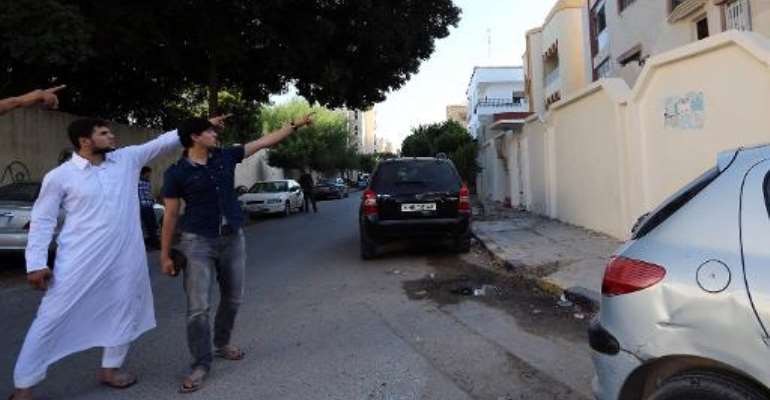 Abdullah al-Raghie (L) and Abdul Moheman al-Raghie (C), the sons of al-Qaeda suspect Abu Anas al-Libi point to where their father was kidnapped by US special forces in a commando raid in Nofliene, on October 6, 2013. By (AFP)

Nusa Dua (Indonesia) (AFP) - US Secretary of State John Kerry said Monday the capture of an Al-Qaeda operative in Libya was "appropriate and legal" after officials in Tripoli demanded answers about the "kidnap".

Kerry refused to comment on whether Washington had informed the Libyan government beforehand about Saturday's raid to capture Abu Anas al-Libi, who was indicted in connection with the 1998 bombings of US embassies in Kenya and Tanzania.

The US top diplomat told journalists at a meeting of the Asia-Pacific Economic Cooperation (APEC)forum in Indonesia's Bali island that the US does "everything in its power that is appropriate and legal" to hunt down terrorists.

When asked by reporters whether Washington had informed Libya before the raid, he said the US does not get into "the specifics of our communications with a foreign government" when it comes to operations such as the one that led to the capture of Libi.

Tripoli insisted the raids had no official authorisation and a source close to Libi said he was "kidnapped" while returning from dawn prayers.

A US official told AFP that Libi, who was on the FBI's most wanted list with a $5 million bounty on his head, was taken to a US Navy warship in the region and was being questioned there.

On Saturday a US Navy SEAL raid also took place thousands of miles away in the southern Somali port of Barawe.

The success of that assault on the beachfront villa of a leader of Somalia's Al-Qaeda-linked insurgents was still unclear, with the fate of the target uncertain.

It came after last month's siege of an upscale shopping mall in the Kenyan capital Nairobi that left 67 people dead.

Kerry's comments came as Asia-Pacific leaders convened for the annual APEC summit on Monday, which President Barack Obama has been forced to miss due to the US government shutdown.