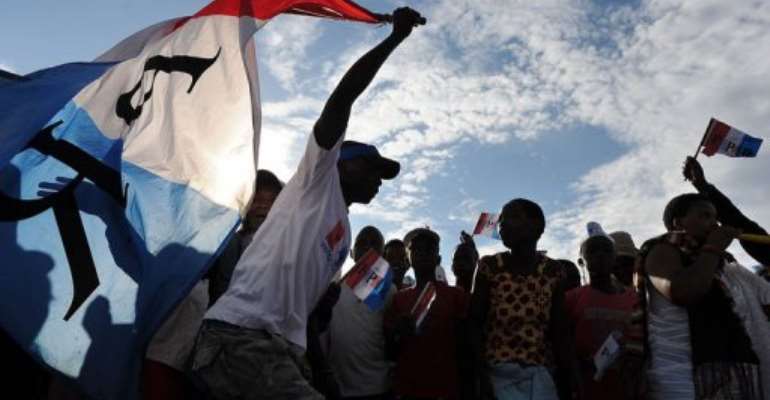 A man holds a party flag as supporters of the ruling Rwandan Patriotic Front (RPF) rally in Kigali on September 14, 2013. By Tony Karumba (AFP/File)

KIGALI (AFP) - As Rwanda prepares to vote in parliamentary elections on Monday, the country's small independent parties are struggling to gain political space in what will essentially be a one horse race.

The central African nation has been dominated by the Rwandan Patriotic Front (RPF) of President Paul Kagame since 1994, when his rebel army unseated Hutu extremists and ended a genocide that left close to a million dead.

Since the horrific events of nearly 20 years ago, when the outside world stood idle while ethnic Tutsis were hacked to death en masse, Kagame's RPF has been credited with producing an African success story.

Economic growth is robust, crime is low and corruption levels are the lowest on the continent. According to the World Bank, Rwanda is one of the three best places in sub-Saharan Africa to do business.

But the tiny political opposition say the country's democracy is a little less healthy, with anyone existing outside the RPF fold facing the realities of a one-party political culture -- not through a government policy of repression but more an inability of officials at all levels to adopt a multi-party mindset.

The PS-Imberakuri party, one of three groups trying to win a few seats from the RPF-led coalition, said in some cases over-zealous local authorities were preventing other parties from even holding basic campaign rallies.

"The local authorities tell people not to go to rallies, and that if they do they'll have problems, and so some people are scared of coming," party president Christine Mukabunani told AFP.

"They assume that an opposition is an enemy and will cause trouble."

Independent candidate Gilbert Mwenedata said that his supporters had been prevented from putting up campaign posters, although he said the authorities did resolve the problem when he complained.

"The problem is the political culture," he said, explaining that Rwanda, long dominated by the RPF and understandably wary of any instability, was still uncomfortable with the idea of a multi-party system.

"Many people in the local authorities don't even know what an independent candidate is," he said.

A human rights activist explained that in today's Rwanda, there is little distinction between the RPF and the state apparatus as a whole -- making government workers unable to develop a culture of impartiality.

"RPF members are everywhere, from the Umudugudu -- the smallest administrative entity -- to the provincial level," said the activist, who asked not to be named.

He the said the country's 'Imihigo' system -- or performance contracts that push local authorities to be accountable to the government -- meant that some local officials felt obliged to outdo themselves when it came to displaying party loyalty.

The National Election Commission, which is organising this week's elections, insisted that non-RPF parties or candidates were not being repressed, although it did not rule out isolated incidents or problems.

Charles Munyaneza, a senior NEC official, said that Rwandan law enshrines the right for any party to campaign and be given equal media coverage.

"When we hear (complaints) we intervene, but some people can say many things even if they are not true," he said, playing down any major problem.

He did concede, however, that a "few individuals" and "zealous" government supporters were not respecting the rules.

"We tell them that when it comes to elections they have to give every party an equal opportunity," he said. "We are still building... Rwanda is still a young democracy, still growing."

Some six million people are eligible to cast their ballots, with direct voting Monday for 53 seats, followed by a further 24 seats reserved for women to be chosen Tuesday by women's groups and local councils.

On Wednesday, representatives of the youth and the disabled will be named.