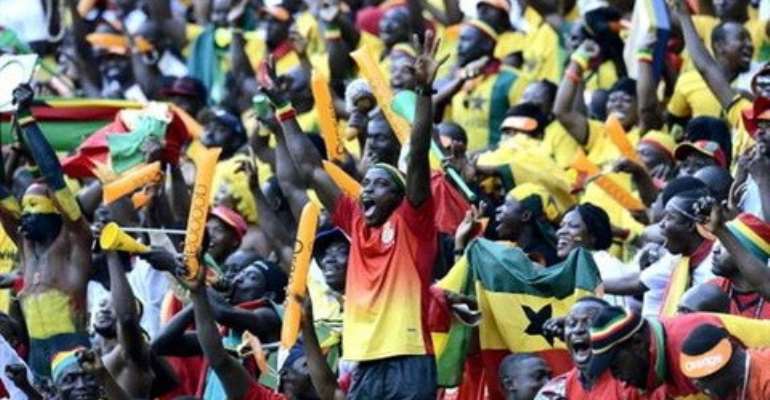 Hassan Ayariga was proud - grinning from ear to ear. He may not have won the political captaincy band in his bid to be president. But well, captain of a select side of politicians? That's fine - For now. And so he was seen directing his players to properly position themselves in a simple 4-4-2 formation.

A minister of God offered an elaborate prayer that involved the tight squeezing of his countenance as he ordered peace wherever it was to hang around the country no matter what happens Thursday.

The spectators shouted amen! amen! – an usual chant for a unusual football match.

In his number 10 jersey, Titus Glover, a Tema West NPP MP, in a pre-match interview explained the rationale behind the game. It was to prove that there was nothing NPP or NDC about the spectators and players. It was about Ghana. But the game ended up proving so much more – the health of politicians should be a national concern.

The 2012 PNC presidential candidate Hassan Ayariga blamed his potbelly on his wife and women who have been supplying all kinds of food since he and others lost the election. His analysis proved that Adam was the first politician after blaming Eve for a delicious but forbidden apple.


The political team disintegrated as soon as the referee kicked off the game.

A retired player required little skill to score the first goal under one minute. It was a tame, lame shot but the goalkeeper, CPP's National Organizer, Abu Forgor didn't appreciate the need to jump or dive to save a shot. He chose to run after it.

And Abu Sakara, nearly passed out chasing the ball as Mohammed Polo together with two retired footballers played triangles around the CPP presidential candidate.

Another politician mistakenly kicked the ball at his teammate as if to revenge for an off the field incident.

And in all this, Ayariga made dangerous runs that threatened his health than his opponent. But he was happy, content and gleeful. All he appeared to want was his captaincy. Nothing else mattered. Not even after they were down by four goals in 10minutes.

Politicians? A strange breed.
NDC Chairman Kwabena Adjei sat around the technical area laughing at his colleagues. There were so many ways to score a goal he may have thought. In football the winner takes all. It either a trophy or three points.

Henry Lartey of the GCPP had serious difficulty controlling a near stationary ball. He didn't appear sure whether to use the left foot or right. A wrong foot could be an irregularity, you know?

But the brightest spot came from Haruna Iddrisu, Minister of Trade and Industry. And he was industrious. Running through two defenders in the 18 yard area, he fed a pass to Solomon Nkansah, deputy propaganda secretary of the NDC.

But the propagandist was sprawled in the penalty box after little contact with his opponent. And he was signaling enthusiastically for a penalty –propaganda on the pitch.

If Solomon Nkansah missed his first chance, he buried his next two chances, reducing the deficit by two goals. But Ayariga appeared to be claiming the credit with the way he run around taking high fives after each goal while pointing his finger to the sky. Maybe inspirational credit- captains do that, don't they?

Bernard Mornah, PNC General Secretary used the occasion to reveal his massive thighs while still maintaining that political parties are not corrupt.

The game ended 4 goals to 2 against the politicians and Dr. Abu Sakara's white jersey looked the same spotless white just as he started.

In a post-match interview Hassan Ayariga summed up the essence of their defeat. He said it was show that all though they had lost, nobody was sad or angry.

Yeah right – how can you be sad or angry when your party garners 1% of presidential ballots?