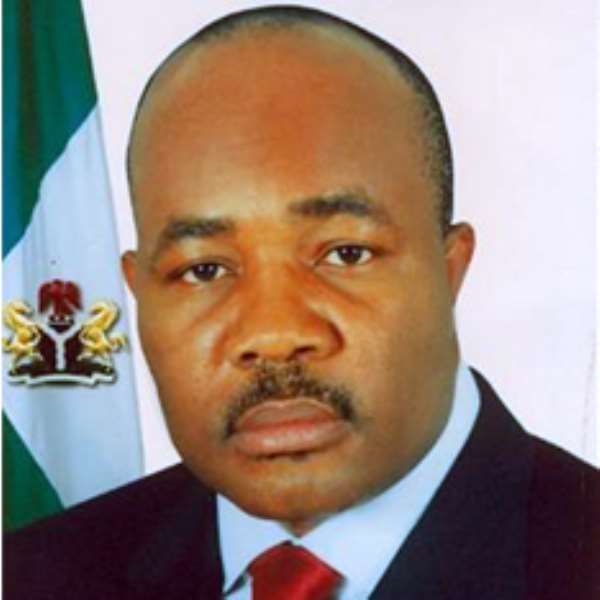 The source expressed shock over the involvement of Ita Benedict, in what he described as Umana's new hang men while Akpabio/Bassey Albert media aid should be involved. Why should Ita have anything to do with Bony that has been known to blackmailing the finance commissioner for his principal for a while now. The source expressed surprise at the level of politicking played by Ita to the detriment of his boss ( Mr. Bassey Albert Akpan). Another source very close to Ita said that their romance is not unconnected with the just concluded NUJ election, which Prince Bony Nyong tricked Ita to deliver his candidate for the principal which according to him Ita, his principal Bassey Albert Akpan stands as option B should Ibibio reject the candidature of Umana Okon Umana.

Also one of the persons who sold the news out said, he was shocked at the level of dirty politics played by Ita Benedict and Bony Nyong. He said he has to expose the deal because the new SSG, Mr. Emmanuel Udom, is his personal friend and he cannot be a party to his betrayal. He also vows to expose the dirty deal further if his agreed money is not fully paid. According to him Prince Bony Nyong promise to give them five million naira for a start, spy camera, spy phone and pen. The essence of the camera, pen and phone is to always follow-up the new SSG especially at odd hours and set him up to have evidence to show the governor. He Prince Bony also made them to swear 'mbiam oath' which did not go down well with most members of the group who claim to be Christians but according to the source Ita and Bony insisted on the oath taking to establish a strong bond among them.

Top on the agenda of the meeting was that as long as their principal Umana Okon Umana was disgraced out of that seat no occupant of that same seat will know peace. When one of the members asked him why, he replied that he is acting on the principal's instructions.

Another very disturbing agenda on the meeting was Bony's resolve to deal with Bestman media team headed by Iboro Otongaran for insulting his person and saying that Mr. Umana Okon Umana has no media 'expert', describing him as a frolic of his own. He said that Michael Bush is a small boy and has no authority over his affairs with his 'principal' Umana. He promise also that before March, 2014, there will be nothing like Bestman media team. He personally expressed disappointment in the press release issued by Bestman media team, who called themselves experts that, the same press release removed his boss from office.

Also on the agenda of the Bony and Ita led media team is to rubbish all perceived Umana Okon Umana enemies in government and make sure that all those seen as Umana's rivals are also shown the way out.

The scheduled meeting yesterday could not hold because of Ita's trip, Bony had to postponed the meeting pending when Ita would be back to the state.

It was also disclosed that Amos Etuk is shaky in the meeting, he confided with another member that he is there because Ita Benedict roped him in. His words 'I am only here to keep my salary of N35,000.00 afloat otherwise I would not be here' ' I cannot also sum-up courage to asked my friend and boss Mr. Bassey Albert Akpan, if he is aware of Ita's romance with Bony Nyong, my hands are tight because even the new SSG is my friend.'

Also Saviour Ekpe's fears according to the source is the 'mbiam' oath which is against his religion as a born again Christian, he swore to blow the job should anything happen to him.

But the source said that Bony has assured them that nothing would happen to any of them.

It could be recalled that Godswill Akpabio, the Governor of Akwa Ibom State disgraced the former SSG, Mr. Umana Okon Umana out of the office, when Umana dared him to declare his intention openly to contest the 2015 governorship election.

Trouble started when Akpabio openly declared in a town hall meeting at Eket that he had no anointed candidate.

Also political observers said that the removal of the former SSG, Mr. Umana Okon Umana has brought calm to the political scene of Akwa Ibom State. It also observe that if the activities of Bony Nyong and Ita Benedict are not checked the new SSG will soon start to experience media attacks.

Emmanuel Edet, Nsit Street, Uyo, Akwa Ibom State
(no man has the right to rule over another, without that person's consent)