By Anne Le Coz and Christian Panika 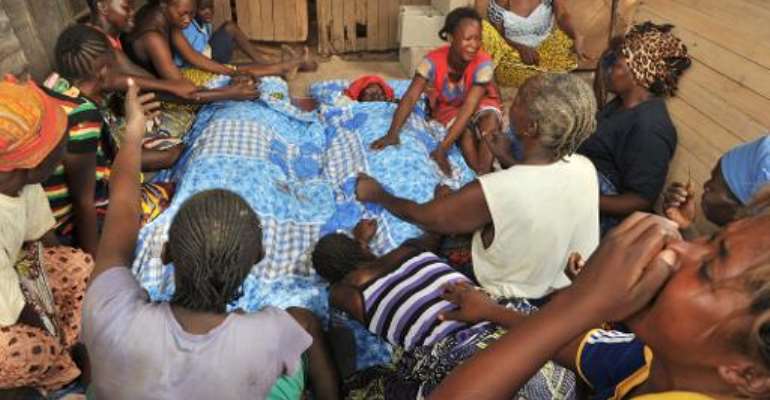 Members of a family sit on February 9, 2014 in Bangui, over the bodies of two relatives killed in one the of the city's central neighbourhoods. By Issouf Sanogo (AFP)

Bangui (Central African Republic) (AFP) - A weekend of violence and looting in the Central African capital has left at least 11 people reported dead, including two Muslims who were gruesomely lynched and a lawmaker gunned down in a drive-by shooting.

Fighting flamed up on Saturday evening between Christian vigilantes and Muslims in the west of Bangui where many buildings were torched, according to witnesses.

A resident told AFP that the Muslim killer of a Christian woman was lynched and killed before his body was burned and dumped in front of the local town hall, where it could be seen early Sunday.

A suspected Christian militiaman killed another Muslim civilian, and was about to burn the body when Rwandan soldiers of the African peacekeeping force MISCA shot him dead, a witness who gave his name as Innocent told AFP.

The shooting prompted an angry crowd to shout slogans against the Rwandan soldiers, whom they mistakenly believed to be Muslim. "Death to the Rwandans," one shouted, according to Innocent.

Five other people were killed in unclear circumstances, the witnesses said.

On Sunday the Central African League of Human Rights told AFP that a Bangui lawmaker had been gunned down by attackers on a motorcycle.

Jean-Emmanuel Ndjaroua, representative of the southeast region of Haute Kotto, had condemned violence against the Muslim residents of his district in front of the interim parliament on Saturday.

The former French colony has been engulfed in violence for nearly a year since the Seleka rebel group installed Michel Djotodia as the country's first Muslim leader in a March 2013 coup.

The following months saw rogue Seleka fighters unleash a wave of atrocities against the Christian majority, prompting the emergence of vigilante groups.

The violence has raged unabated even after Djotodia stepped aside and the parliament appointed interim President Catherine Samba Panza last month, and Muslims have been fleeing the violence in their thousands.

A man was lynched Friday after he fell off a lorry in a convoy of terrified Muslims fleeing Bangui. Residents hacked him to death and dumped his body on the roadside.

'The French won't fire at us'

Meanwhile looting was rampant in the capital, where young people could be seen removing furniture and equipment from buildings and shops -- some still smouldering from fires set on Saturday -- despite the heavy presence of French and African peacekeepers as a French helicopter gunship circled above.

The peacekeepers went from door to door to try to rout the looters, who simply moved on to other targets, pushing their carts and wheelbarrows between French armoured cars.

"The French won't fire at us," one young looter said, laughing.

Chad, the impoverished country's neighbour to the north, has 850 troops in MISCA and is also home to 950 French troops -- Paris's largest concentration of soldiers abroad after Djibouti.

Le Drian is to meet Chad's President Idriss Deby, often described as the kingmaker of Bangui politics, before heading to Brazzaville for talks with President Denis Sassou Nguesso, a mediator in the conflict.

On Wednesday Le Drian will begin his third visit since the French operation codenamed Sangaris was launched two months ago.

Muslim Central Africans and foreigners have been fleeing Bangui for several months to escape killings, looting and harassment by armed Christian militias.

The International Criminal Court said Friday it had opened an initial probe into war crimes in the Central African Republic.

Atrocities, the fear of attacks and a lack of food have displaced almost a quarter of the country's population of about 4.6 million, while the United Nations and relief agencies estimate that at least two million people need humanitarian assistance.

The landlocked country has been prone to coups, rebellions and mutinies for decades, but the current sectarian conflict is unprecedented.