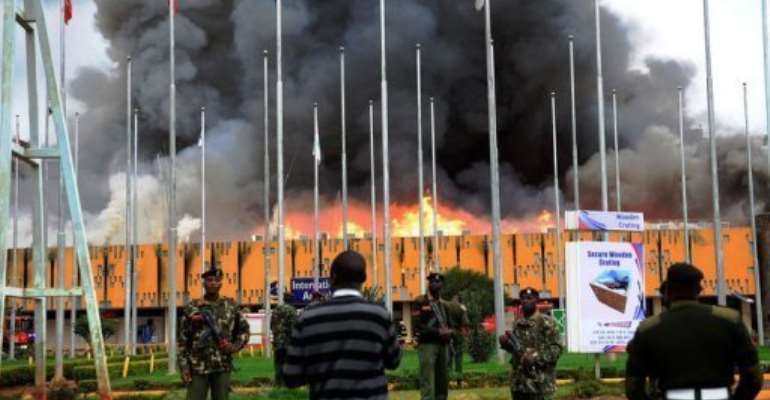 NAIROBI (AFP) - A devastating fire shut down Nairobi's international airport Wednesday in a "major crisis" that forced scores of flights at east Africa's biggest transport hub to be cancelled or diverted.

Dramatic plumes of black smoke billowed out of the main arrivals terminal, but by 9:00 am (0600 GMT), some four hours after the blaze broke out, firefighters had succeeded in stemming the raging flames, despite being hampered by a lack of water and equipment.

"Everything is being done to resume normal operations," said presidential spokesman Manoah Esipisu, speaking to reporters outside the gutted arrivals hall of the Jomo Kenyatta International Airport (JKIA), where flames had earlier lit up the pre-dawn sky.

While cargo and domestic flights were due to resume later on Wednesday, Esipisu said, no timeframe was given for when international flights might restart.

Some 16,000 passengers usually transit through the airport every day, Esipisu added.

The airport -- which hosts both international and domestic flights -- serves as a regional hub for east Africa, with many long-distance international flights landing there to connect to countries across the region.

Chunks of the roof of the international arrivals terminal had caved in.

Tens of thousands of passengers will be affected by the closure of the airport, while regional airports have limited capacity and will likely struggle to handle all the travellers unable to land in Nairobi.

Around 250 flights take off and land there every day, regional aviation sources said, adding some six million passengers used the airport last year.

The fire was reported to have begun at the immigration section at arrivals, but the cause is not yet known.

Police chief David Kimaiyo said that investigations had begun, as he urged the public to remain calm.

No casualties have been reported, but two people -- an airport worker and a passenger -- were taken to hospital for smoke inhalation, Kenya Airways' chief Titus Naikuni said.

The interior ministry was forced to issue public appeals for Nairobi's notoriously congested traffic to give way to trucks ferrying water to the airport after firefighters tackling the blaze ran "dangerously low on water".

Soldiers and police even came with buckets to help put out the inferno, said Sylvia Amondi, who was at the airport to pick up a relative who had been due to arrive at the airport.

"The airport fire brigade acted in good time but the personnel wasn't enough, the army and some police came with empty buckets to manually put out the fire," Amondi said.

"The international arrivals station has been completely destroyed, the roof has caved in and the floor is covered in debris and water."

However, the runway is not affected and cargo flights and aircraft whose passengers were already checked in were allowed to take off.

The blaze comes two days after aircraft were delayed for several hours after the failure of a fuel hydrant needed for refuelling the planes.

It also comes 15 years to the day after attacks on the US embassy in Nairobi and in Dar es Salaam in neighbouring Tanzania killed 224 people.

The United States has ordered two dozen of its embassies closed in the Middle East and some African countries because of fears of an Al-Qaeda attack, but not Kenya.

There was no suggestion the Nairobi fire was linked to any attack.

Before the blaze was extinguished, an AFP photographer at the airport reported clouds of black smoke spewing out of the main arrivals and departures terminal, with dozens of police and fire trucks at the scene.

President Uhuru Kenyatta, whose father Jomo Kenyatta -- Kenya's first president -- the airport is named after, visited the charred terminal along with his top security chiefs to assess the damage caused by the "huge inferno", the interior ministry added.

Flights have been diverted to other airports, including the port city of Mombasa, the interior ministry added.

The airport offers direct connections to Europe, the Middle East, the Far East and other African cities.

August is one of Kenya's busiest months for tourism, a key industry for the country, as foreign travellers fly in to see its wildlife and the white sand beaches on its Indian Ocean coast.