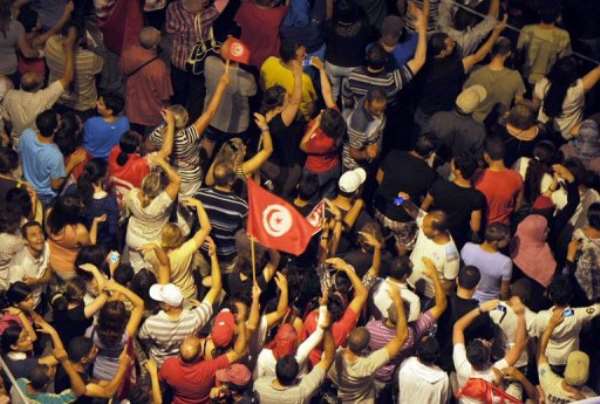 TUNIS (AFP) - Tunisia's Islamist ruling party chief has said the government will not step down under pressure from the opposition, even as fresh protests were being readied Tuesday to demand just that.

And Prime Minister Ali Larayedh took a swipe at demonstrators, saying they were hampering efforts by security forces to root out gunmen linked to Al-Qaeda.

Rached Ghannouchi's remarks, published by La Presse newspaper, will likely deepen a crisis that has gripped the North African nation since a political assassination in February was followed by another last month.

"There are excessive demands at protests for the dissolution of the elected government," Ghannouchi told La Presse.

"In democratic regimes, protests don't change governments; it's under dictatorial regimes that a demonstration is able to topple a regime.

"Unfortunately every time a tragedy hits us, we immediately call for the dissolution of the government and parliament," Ghannouchi added.

A mixed bag of opposition parties, running from the extreme left to the centre-right, is planning a massive protest in Tunis at 2000 GMT to mark six months since opposition politician Chokri Belaid was gunned down outside his home.

Government detractors say the Ennahda-led cabinet has failed to rein in radical Islamists blamed for Belaid's murder and the assassination of MP Mohamed Brahmi on July 25.

Tunisia has been rocked by anti-government protests since Brahmi's death, and protesters have clashed with police, who have used tear gas to disperse them.

Authorities said Brahmi was murdered with the same gun used to kill Belaid, and Larayedh said on Sunday that a first arrest had been made in the Belaid case.

Protesters are also calling for the dissolution of the National Constituent Assembly, which was elected nearly two years ago and has still not managed to complete its task of writing a new constitution.

The powerful, half-million strong Tunisian General Labour Union (UGTT), has issued a call for its members to join Tuesday night's demonstration, but it does not back demands for the NCA to be dissolved.

Meanwhile, the employers' federation, the Tunisian Union of Industry, Trade and Crafts, again urged on Tuesday the formation of a government of technocrats.

The NCA gathered on Tuesday to discuss the "terrorist crisis" in Tunisia as security forces pressed on with a vast operation to hunt down militants holed up in the rugged Mount Chaambi region near the Algerian border.

Speaking to the assembly, the prime minister had harsh words for demonstrators, saying their activities meant security forces "are obliged to be in the streets when they should be participating in the battle against terrorism."

That struggle "should be above political jockeying, of narrow partisan interests," Larayedh added, calling on all parties to "reinforce national unity."

Defence Minister Rachid Sabbagh told the NCA that the armies of Tunisia and Algeria would "reinforce their cooperation, particularly to arrest the Chaambi terrorists."

Interior Minister Lotfi Ben Jeddou said around 40 people suspected of belonging to the group had been arrested since December and that another 58 were being sought.

The military has been hunting the militants since then, and stepped up its offensive after eight soldiers were killed in an ambush on July 29.

Two soldiers killed when their armoured vehicle was hit by a roadside bomb on Sunday were buried after a memorial ceremony attended by both Larayedh and President Moncef Marzouki.

Ghannouchi also dismissed critics who say authorities are being too soft on radical Islamists, who have grown in influence since the 2011 popular uprising that toppled strongman Zine El Abidine Ben Ali.

"There are 500 to 600 terrorist suspects imprisoned in jails," he said, without giving further details.

Larayedh has also ruled out the government's resignation, offering instead to broaden the coalition and calling for a general election on December 17.

He reiterated that on Tuesday, pressing for the constitution and an electoral law to be in place by October 23 to make way for the December polls.