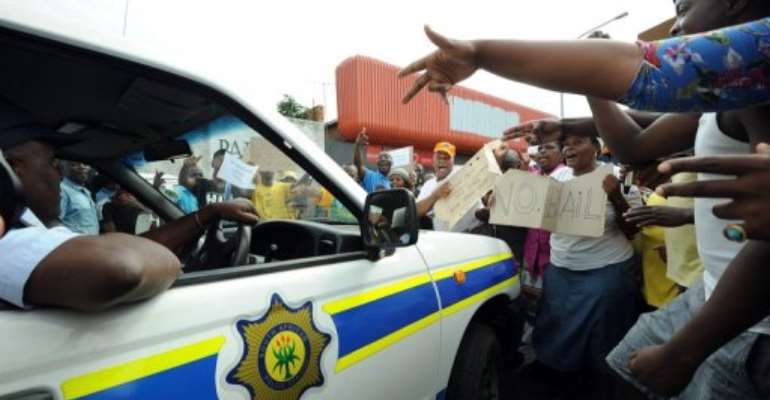 Protesters shout as a police car drives outside the Benoni court on March 8, 2013. By Alexander Joe (AFP/File)

BENONI, South Africa (AFP) - A South African court is expected to rule Tuesday on bail for nine policemen charged with murdering a Mozambican dragged behind their van and then beaten to death.

In a third day of hearings into the killing of Mido Macia, 27, exactly two weeks ago, defence lawyers said nothing implicated their clients.

"We do not even have evidence that would suggest these accused are the source of that death," said advocate Elias Tshole.

The state's case was weak, he claimed.

Bystanders on February 26 filmed Macia being manhandled, handcuffed to the back of a police van and dragged hundreds of metres (yards) through the streets of Daveyton, a town east of Johannesburg.

Just over two hours later he was found dead in his cell, with extensive injuries, including cuts and bleeding on the brain, in a case that shocked South Africa and the world.

Police had to protect the defence lawyers Monday when a small crowd of protesters attacked them leaving the court, amid outrage at apparent police brutality.

But Magistrate Sam Makamu rejected the defence's application to stop a live streaming of the hearing in a nearby courtroom, where they claimed some of Monday's attackers had watched the case and recognised their faces.

Makamu warned the lawyers against "telling lies in front of court that will taint your integrity" when they falsely quoted a policeman in their request.

Later, Tshole, who earlier voiced fears for his safety after the attacks, said the protests were not so serious as to prevent his clients getting bail.

Prosecutors in the Benoni Magistrate Court say the taxi driver was brought to a police station crying, bleeding and without trousers.

Investigators also found blood spots on his cell's walls and floor, suggesting he was abused at the police station.

Macia was later discovered lying on his back in a pool of blood wearing a red shirt and black underwear briefs.

The prosecution argues that the policemen should not be granted bail as such a move could disrupt public peace.

The men were in danger of reprisal attacks and could interfere with evidence because some witnesses were their colleagues, the court heard.

But the nine cops say they are not to blame.

Macia, a minibus taxi driver, had assaulted a policeman while resisting arrest after being confronted for parking his taxi on the wrong side of the road, they say.

The driver of the police van claimed he drove away to escape an angry crowd that had gathered, and did not know Macia was being dragged behind.

None of the accused have explained how the Mozambican ended up cuffed to the van or dead in his cell.

Their lawyers Monday claimed the driver had killed five children in a car accident days before he died, apparently suggesting his injuries from that incident may have led to his death.