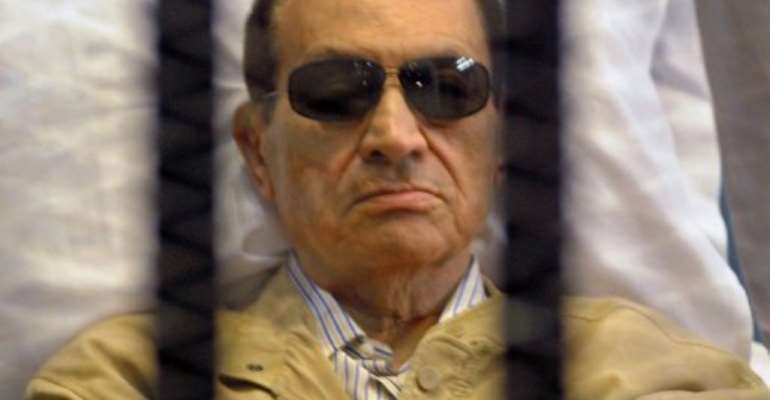 Ousted Egyptian president Hosni Mubarak sits in a cage in court during his verdict hearing in Cairo on June 2, 2012. By (AFP/File)

CAIRO (AFP) - Toppled president Hosni Mubarak, awaiting trial over his role in the deaths of protesters, believes Egyptians should rally around his Islamist successor and end violent protests, his lawyer told AFP on Monday.

President Mohamed Morsi, twice jailed by Mubarak before he himself was overthrown on February 11, 2011, is the "elected president, people should rally around him," the former strongman told his lawyer Farid a-Deeb.

"Mubarak is sad and frustrated" by recurring violent protests around the country targeting the Islamist president, Deeb told AFP.

The 84-year-old had been sentenced to life in prison for his role in the deaths of protesters during the 18-day uprising in 2011 that ended his three decade reign.

But a court overthrew that verdict and ordered a new trial which is set to start on April 13.

Mubarak also spoke out against violent protests, although he believed Egyptians have the right to peaceful demonstrations, Deeb said.

Roughly 850 people were killed in the uprising.

Mubarak has suffered a number of health scares in prison that prompted his transfer to a military hospital. Deeb said his health has "improved."

Morsi, who won elections last June on the Muslim Brothehood's ticket, had pledged new trials for former regime officials including Mubarak implicated in the protesters' deaths.

Morsi's presidency has been plagued by unrest and deadly clashes between protesters and police. Port Said, a city on the Suez Canal, has been in open revolt against the Islamist.