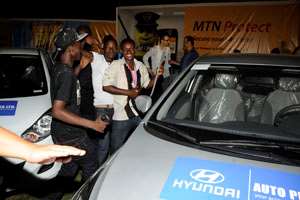 Daniel Azuberi on Saturday night added his name to players who have distinguished themselves in the MTN Soccer Academy reality show when he emerged  winner of  the Academy  Skuulz Challenge  in Accra.

The Bolgatanga Senior High student did not only win the ultimate – a brand new Hyundai Accent Car, a  cash prize, a Europe training tour, a medal and a trophy; but finished as the show's top scorer with 16 goals.

His school also benefitted from his exceptional brilliance, receiving the key to a brand new Hyundai Accent saloon car.

Sekondi College's Essau Stephen picked the second prize- a brand new Hyundai  i10, a cash prize, a medal  and a trophy, while Bawa Abou of Wa Senior High School was adjudged the third best player of the competition.

Sports Minister Elvis Afriyie Ankrah described the show as key to national development, taking into account how sports has always been very important in the country's  school curricula.

He praised the organizers of the competition, Optimum Media Prime (OMP), title sponsor MTN and supporting sponsor Auto Plaza for supporting the innovation. He urged head of schools to place premium on sports in their various curricula.

'I have been told that this competition, over the years, has contributed great players to various football clubs, notable among them are Kotoko's Gideon Baah, who is on his way out to Finland  and Arago Jamal, currently in Greece plying his trade,' the Minister said.

Having provided brand new vehicles to winners and first-runners up for the past six years, Auto Plaza Managing Director Jihad Hijazi said, 'We believe that adding one more vehicle to the two we provide each year is a step in the right direction because we believe 'from small acorns, the mighty oak tree grows'. Therefore motivating the schools from which these talented young footballers have come will promote sports in our educational system.'

Chairman of the Global Village Group, Talal Fattal, expressed his outfit's strong conviction of the potential of combining sports and education hence the theme 'The Skuulz Challenge.'