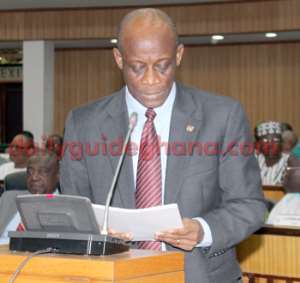 Global rating agency Fitch has stated that it could downgrade Ghana's credit worthiness soon because government's strategies, which were recently outlined in the 2013 Budget Statement, were unlikely to address the 2012 budget deficit.

Government noted in the budget statement that it would reduce the deficit to about 9 percent of GDP and lessen it for the next three years, but Fitch expects Government to close the gap to 8 percent and 5 percent next year.

The deficit skyrocketed last year from a revised estimate of 6.7 percent in July.

Ms Altenkirch further noted: 'Failure to set out and implement a credible consolidation plan and improve expenditure control could lead to a downgrade.'

In an e-mailed note to Bloomberg recently, Fitch placed a negative outlook on Ghana's credit rating last month, indicating a cut on the rating may happen if fiscal conditions don't improve.

Increases in government salaries, higher interest costs to pay debt and spending ahead of December elections eroded the government's ability to narrow the deficit, Fitch said.

On government's debt which rose from 40 percent during the start of 2012 to 49 percent by the close of the year, the renowned rating agency said if fiscal consolidation does not take place, 'the debt situation will continue to worsen' and spell difficulties for the economy.

Ghana's credit outlook has been revised from positive to negative except its credit rating which stands at B+. This means Ghana in the next few months might not be able to honour its debt obligations.

It affirmed the country's long-term foreign and local currency Issuer Default Ratings (IDR) at B+ with a stable outlook and short-term foreign currency IDR at B.

The agency has also affirmed the country ceiling at B+.

Fitch Ratings, which forecast Ghana's growth at an average of 8.6 per cent over the next three years, projected the country's growth to be boosted by rising oil production and its positive spillover effects on the economy, as well as infrastructure spending but strategies outlined by Government in the 2013 Budget have made the agency doubtful of Ghana's ability to reduce the deficit.