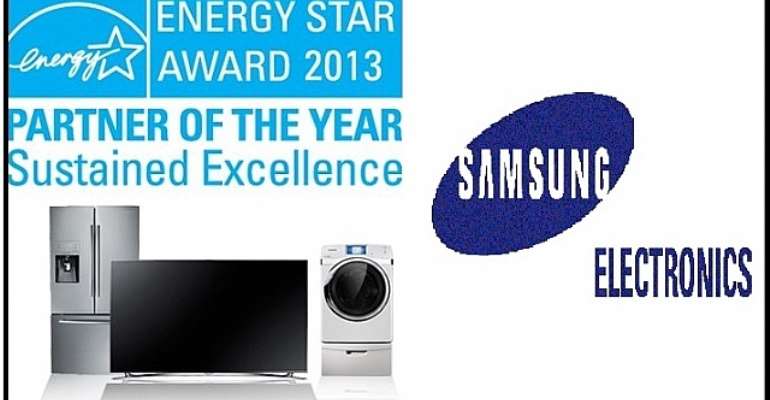 Accra, March 8, GNA - Samsung Electronics has received the 2013 ENERGY STAR Partner of the Year - Sustained Excellence Award from the U.S. Environmental Protection Agency (EPA) for protecting the environment through various activities all focused on providing products with superior energy efficiency.

A statement issued to Ghana News Agency on Thursday in Accra said Samsung was selected among nearly 20,000 organisations in the U.S. participating in the ENERGY STAR program because it highlighted much on the importance of energy efficiency and greenhouse gas reduction with various consumer programs that actively promoted the 'Change the World'.

It said Samsung started with 'ENERGY STAR' campaign such as an electronic billboard in Times Square, an Eco-zone at the Consumer Electronics Shows (CES), and at Boys and Girls Club of America events through the year.

It added that Samsung also worked with its employees, retailers and distributors to create training programme that stressed the importance of energy and reducing greenhouse gas emissions.

Mr Kim said the prestigious honour recognised Samsung's corporate commitment to sustainability, adding that would encourage them to continue seeking smarter ways to manage their operations sustainably while developing the most innovative and energy efficient products.

With the help of ENERGY STAR in the past 20 years, American families and businesses have saved more than 230 billion dollars on utility bills and prevented more than 1.8 billion metric tons of greenhouse gas emissions, which is equivalent to more than 350 million vehicles.

The 2013 Partner of the Year - Sustained Excellence Awards are given to a select group of organisations that have exhibited outstanding leadership year after year. These winners have reduced greenhouse gas emissions by setting and achieving aggressive goals, and employing innovative energy efficiency approaches.

These awards recognise ongoing leadership across the ENERGY STAR program, including energy-efficient products, services, new homes, and buildings in the commercial, industrial, and public sectors.

A proud ENERGY STAR partner since 1996, this year marks the fourth consecutive year Samsung has been honoured for providing its customers with energy-efficient products that have reduced consumption and helped consumers save on their energy costs.

Samsung will formally accept the ENERGY STAR Partner of the Year - Sustained Excellence Award at the upcoming award ceremony in Washington, D.C. on March 26, 2013.

ENERGY STAR was introduced by the U.S. Environmental Protection Agency in 1992 as a voluntary market-based partnership to reduce greenhouse gas emissions through increased energy efficiency. Today, ENERGY STAR offers businesses and consumers energy-efficient solutions to save energy, money, and help protect the environment for future generations.