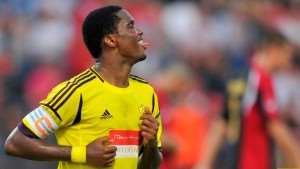 The teams qualified for the knockout stages of the Europa League are known since Thursday.

Many African players have contributed to the qualification of their club.

Anzhi Makachkala assured his victory gained on the way to Russia to face Hanover in the 16th leg of the final (3-1). Samuel Eto'o and his partners held in check by the German club with a goal throughout the Ivorian Lassina TraorÃ©.

Malian Cheik DiabatÃ© sent Bordeaux in eighth finals after his goal of perfect flat right foot from close range. The swift Malian man of the match for this game.

Moussa Dembele and Emmanuel Adebayor will compete with Tottenham on the eighth finals of the Europa League. The Belgian international has allowed the Spurs to go with a draw thanks to a goal around at the last minute following a left foot strike.

Adebayor has also played 90 minutes of the game hit the crossbar and caused repeatedly advocates Lyon. Tottenham passes through its 2-1 victory gained on the go.

Nigerian of Newcastle Shola Ameobi scored the only goal of his training for the qualification in the eighth finals of the competition. he scored this goal in the 64th minute on the field Metalist Karkhiv. On the way, the two teams are separated by the score of 0-0.

The left side Ivorian Arthur Boka who was absent during the AFCON 2013 is shown participating in the victory against the Belgian club Stuttgart FC Genk. He opened the scoring for his German training following a powerful shot. The German club finally won by the score of 2-0.