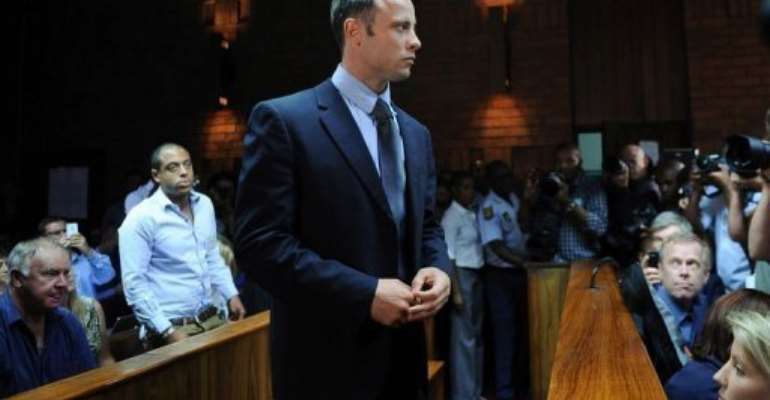 PRETORIA (AFP) - South African athlete Oscar Pistorius, who is accused of murdering his girlfriend, sobbed as a magistrate started reading out a ruling on his bail application Friday.

The star sprinter's shoulders were shaking as magistrate Desmond Nair summarised the accused's statement in a hushed Pretoria courtroom.

Nair had to pause briefly asking Pistorius: "Are you ok there?"

He later regained his composure.

"He hasn't said so, but he must think that conviction is likely. He must realise that a long term of imprisonment is almost guaranteed," he told the court.

Prosecutors say Pistorius is guilty of premeditated murder over the Valentine's Day killing of his model and law graduate girlfriend, Reeva Steenkamp, at his heavily secured home.

If found guilty he faces a possible life sentence.

Pistorius denies the charge, saying that he shot 29-year-old Steenkamp repeatedly through a locked bathroom door in the dead of night by accident, having mistaken her for a burglar.

Friday's ruling is to decide whether Pistorius remains behind bars pending a trial that could last years and which would ruin the career of the star athlete.

He is the first double amputee to compete against able-bodied athletes in the Olympic games last year in London.

Just hours before the magistrate's decision, Pistorius's top lawyer admitted the star sprinter could be convicted on charges of homicide.

The "Blade Runner's" top defence lawyer denied he is guilty of premeditated murder but indicated a lesser charge was likely.

"He is exposed to be convicted of culpable homicide," chief defence Barry Roux told the court, ahead of a ruling on his the sprinters bail at 1230 GMT.

That charge, which entails negligence rather than murderous intent, could carry a sentence of up to 15 years in prison, or in some instances release.

Nel insisted that Pistorius should not be afforded special treatment because of his fame or disability.

"Lots of people have escaped bail. Lots of famous people," Nel said as Pistorius's family -- present all week at the Pretoria magistrate's court -- looked on anxiously.

"What kind of life would he lead, a person who has to use prostheses, if he is to flee?" he asked, conjuring images of a life spent "ducking and diving everywhere, with those prostheses."

Nel responded tersely: "A life of freedom. A life not in jail. What kind of life will I have anywhere that's not in prison? Better."

The prosecution has seen its evidence repeatedly picked apart during the week's proceedings, giving what observers say is a good chance for Pistorius to be released on bail as he awaits trial for the killing.

In a stunning development on Thursday, South African police unceremoniously ditched the lead detective on the case, Hilton Botha, after he bumbled through testimony and it emerged that he himself was facing seven attempted murder charges for having opened fire on a minibus in 2011.

"We recognise the significance, the importance and the severity of the matter," police commissioner Riah Phiyega said naming the country's top detective, Lieutenant General Vineshkumar Moonoo to the case.

Lawyers following the case say the state has failed to present a strong enough case to keep Pistorius behind bars.

"He'll get bail because of the state's weak presentation of its case," attorney William Tintinger told AFP. "The state can't prove that the killing was premeditated."

Summing up his case on Thursday, defence lawyer Barry Roux told the court: "The poor quality of the evidence of investigating officer Botha further exposed ... the disastrous shortcomings in the state's case."

Roux had earlier cast doubt on key prosecution witness evidence suggesting the couple, who had been dating since late last year, had an bust-up before the shooting.

Botha himself was forced to admit that Pistorius's claims were "consistent" with the crime scene.

On Thursday he said of the investigation: "I'm sure it could have been handled better."

Steenkamp was found by medics in the early hours of Thursday last week at Pistorius's luxury Pretoria home covered in bloodied towels, with bullet wounds to her head, elbow and hip. She was pronounced dead on the scene.

In a statement read out in court earlier this week Pistorius said that he had fired at the door of the bathroom as he was "filled with horrible fear" that someone had sneaked in through an open window in the dead of night.

The 26-year-old athlete has previously said he kept a gun in his bedroom because of fears of violent home invasion.

But prosecutor Nel pointed out gaps in Pistorius' own account of the shooting.

"He fired four shots, not one. He meant to kill. On his own version, he's bound to be convicted," said Nel.

Under South African law someone who kills without immediate threat can be charged with murder or culpable homicide.

Pistorius has often cut a sorry figure sitting alone in the dock, having lost weight and showing several grey hairs and often breaking into sobs.